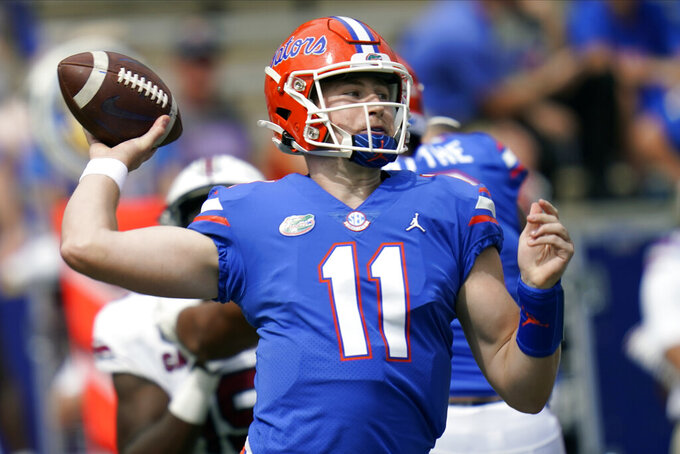 FILE - Florida quarterback Kyle Trask (11) throws a pass against South Carolina during the first half of an NCAA college football game in Gainesville, Fla., in this Saturday, Oct. 3, 2020, file photo. No. 6 Florida doesn't really even try to run the ball anymore. There's an occasional handoff here and there, but the Gators are mostly one-dimensional _ and that's fine with coach Dan Mullen, Heisman Trophy front-runner Kyle Trask and arguably the deepest receiving corps in the country. (AP Photo/John Raoux, File)

Sure, the sixth-ranked Gators hand it off here and there, mostly when they’re leading and/or trying to run out the clock. But they’re as one-dimensional as any Florida team in nearly two decades. And no one is complaining.

Not Mullen. Not quarterback and Heisman Trophy front-runner Kyle Trask. And surely not any of Trask’s receivers, a group widely considered the best in the country.

That was Spurrier’s best passing team in his 26 years as a head coach, spanning Duke, Florida and South Carolina. With Rex Grossman at the helm, the Gators led the nation by averaging 405.2 yards through the air.

Trask and the Gators aren’t quite there, but they aren't far behind. And the ground game has been a victim of their own passing prowess.

“If I want to go put our energy into it, I’m sure we can figure it out,” Mullen said.

Mullen even threatened to open in the wishbone against the Tigers, just to prove to naysayers that Florida can run the ball if it wants.

No one is criticizing the Gators for being so pass-heavy, especially after pedestrian offenses becoming close to a pastime in Gainesville under former coaches Will Muschamp and Jim McElwain.

Florida fans are enjoying the air show. Trask's 376.7 yards passing a game lead the Football Bowl Subdivision. He also tops the nation with 38 touchdown passes, eight more than his closest competitor and the third-highest total through nine games in FBS history.

The general belief is Florida will need to be more balanced against top-ranked Alabama in the Southeastern Conference championship game next week in Atlanta. The Crimson Tide has won six in a row against Florida, which has averaged 13.5 points during the skid.

“We know we can run the ball when we need to,” left tackle Stone Forsythe said. “Maybe that game is coming down the road. But we can do it.”

The last time the Gators topped Alabama was in the 2008 league title game, with Mullen calling plays for Florida coach Urban Meyer. Tim Tebow threw three touchdown passes — all on third down — to upset Bama and eventually win the team's third and most recent national championship.

None of the Florida teams in between could throw it around anywhere close to how this one can.

And the Gators insist they can run the ball better than they’ve shown in recent weeks. They finished with a season-low 19 yards on 17 carries last week at Tennessee.

“We didn’t execute very cleanly in the run game, but we didn’t really try to run,” Mullen said. “Some people would argue we probably tried to run it too much, you know. It’s a fine line. It’s a balancing act. I’m pretty sure if we really tried to scheme up a bunch of stuff in the run game, we could manage to be OK.”

Maybe they will change it up against LSU. Although the safe bet is Mullen will continue letting Trask & Co. handle the workload.

“We got some stuff,” offensive coordinator Brian Johnson said. “We’re going to dust off the ol’ option playbook. … I wouldn’t be shocked. Keep some people on their toes. We have a chance to do some stuff. We’ll see what we come out in, I guess.”