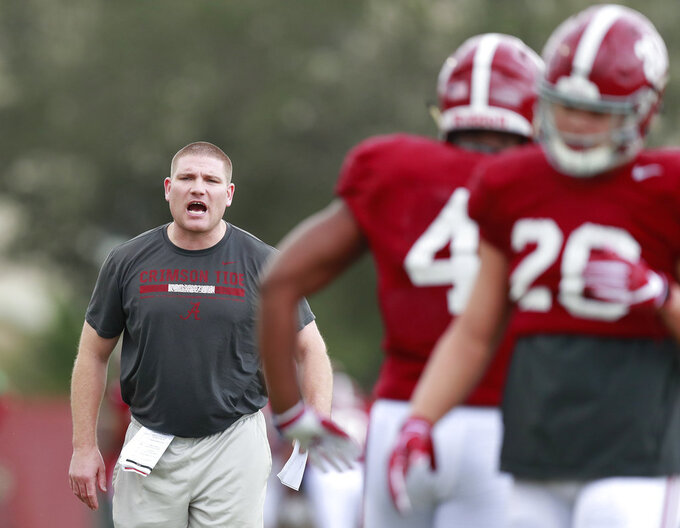 Alabama's defensive coordinator Tosh Lupoi runs plays with his team during an NCAA college football practice on Wednesday, Dec. 26, 2018, in Miami Shores, Fla. The Tide is also on its third defensive coordinator in three years as Tosh Lupoi was promoted after last season to replace Jeremy Pruitt, who is now Tennessee’s head coach. Pruitt got the job when Kirby Smart left to lead Georgia in 2016. (AP Photo/Brynn Anderson)

DALLAS (AP) — Clemson defensive coordinator Brent Venables began his coaching career at Kansas State in the mid-1990s, trying to come up with ways to stop Nebraska's power option. The Cornhuskers were predictable, but often darn near unstoppable.

So as far as Venables is concerned, coaching defenses has always been challenging. Over 25 years in the business, the challenges have only increased as offenses have become more varied and creative and most every rules tweak has made it harder to play defense. Touchdowns and yards have never been more plentiful. FBS records for yards per play, touchdowns per game and points per game set last season are again being challenged in 2018.

As offenses hum along, defensive coordinator has become the toughest job in college football, often the targets for frustrated fans whose teams just can't seem to get a stop. No. 4 Oklahoma reached the College Football Playoff, where the Sooners will face No. 1 Alabama on Saturday in the Orange Bowl, after replacing its defensive coordinator halfway through the season.

And when schools are looking for their next head coach, they have been far more likely in recent years to hire the up-coming offensive guru than a guy with a defensive background. On the bright side for defensive coordinators, the pay is great. This season nine of the 10 highest paid assistant coaches in college football were on the defensive side, along with 16 of the 21 assistants who made more than $1 million in salary, according to USA Today's salary database.

Venables is No. 2 on that list at $2.2 million, behind LSU's Dave Aranda ($2.5 million). Venables and No. 2 Clemson face No. 3 Notre Dame in the Cotton Bowl in Saturday's first CFP semifinal. The Fighting Irish are on their third d-coordinator in three years in Clark Lea. In 2016, Notre Dame coach Brian Kelly fired defensive coordinator Brian VanGorder during a 4-8 season. Kelly hired Mike Elko away from Wake Forest in 2017 and Elko did such a good job turning around the Irish defense that Texas A&M gave him a three-year contract worth more than $1.8 million annually.

While Venables coaches like a sugared-up 10-year-old who can barely stay off the field during the games, Lea is professorial in his demeanor and approach.

"We joke a lot they we definitely chose the wrong side (of the ball) to do it," Lea said Wednesday. "It's a lot more fun to be an offensive coach these days. The challenges inherit in defending modern offense require some ability to process and think and be creative. And I think that's a fun part of what we do. It's a game of strategy."

But, Lea added: "It's not about being schematically cuter than the team you're playing. It's about getting your players in positions where they're confident and they're playing with great fundamentals and they're playing really fast and they're covering spaces. Defense is still about your guy getting off a block and making a tackle and you can't deviate from that. Even as it becomes basketball on grass."

Venables could have been a head coach by now but he can afford with be picky, with a great salary and a boss in Dabo Swinney who has built Clemson into Alabama's biggest challenger for college football supremacy. But for most defensive coordinators, getting a chance to run a program has been difficult.

Over the last two years there have been 42 coaches hired in FBS and 34 have had offensive backgrounds, a fact pointed out recently by Football Scoop. Working for Alabama coach Nick Saban seems to help. The Tide is also on its third defensive coordinator in three years as Tosh Lupoi was promoted after last season to replace Jeremy Pruitt, who is now Tennessee's head coach. Pruitt got the job when Kirby Smart left to lead Georgia in 2016.

Oklahoma defensive coordinator Ruffin McNeill spent years coaching defense for Mike Leach at Texas Tech before becoming a head coach at his alma mater, East Carolina. After being fired at ECU, coach Lincoln Riley brought McNeill to Oklahoma in 2017 to be defensive line coach. Riley turned to the 60-year-old McNeill in October to try the Sooners' defense after Mike Stoops was fired.

Especially in the wide-open and wild Big 12, a defensive coordinator needs drown out the criticism and not get too down about those gaudy scores.

"As a play-caller or a defensive coach, you've got to make sure you keep things in perspective and respect it and know there's a good chance they can put some points on the board," McNeill said. "But you can't caught up into worrying about it too much. The defensive thought process has to be get the ball back to your offense. Break serve. Of course, as a defensive guy all his life, 38 years of coaching, you'd like to have a zero. But at the same time you've got to be ready to evolve and know the quarterbacks are really developed. You have to be ready to not accept it, but deal with it, and move on to the next play."