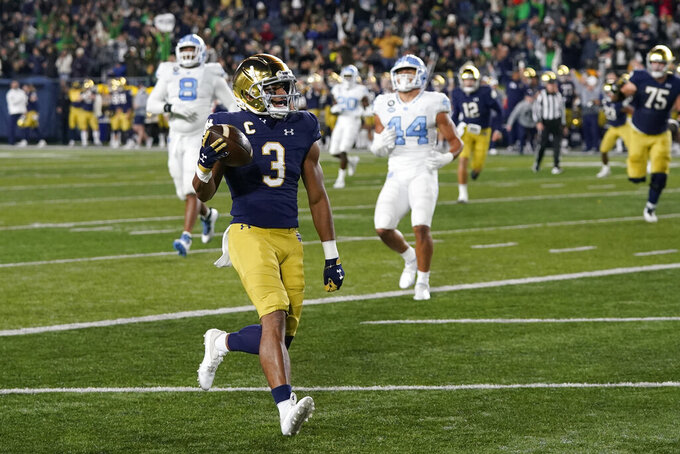 Notre Dame wide receiver Avery Davis (3) runs into the end zone for a touchdown during the first half of an NCAA college football game against North Carolina , Saturday, Oct. 30, 2021, in South Bend, Ind. (AP Photo/Carlos Osorio)

SOUTH BEND, Ind. (AP) — On a night when he had a 91-yard touchdown run early in the fourth quarter, Kyren Williams once again gave credit to his offensive line as No. 11 Notre Dame held off Sam Howell and upset-minded North Carolina 44-34 on Saturday in a game that had over 1,000 yards in offense.

“Their blocking means everything to me because I know what they do every week,” the 5-foot-9, 199-pound Williams said after rushing for a career-high 199 yards on 22 carries. “I just appreciate all of my boys working collectively as a group.”

“We did some good things with good balance on offense running it and throwing it,” Kelly said. “I really love this team. I love their grit but I like they are getting better.”

Despite the loss, Brown was impressed by both teams’ play. “I thought it was a great game,” he said. “Both teams played really hard, both offenses ran up and down the field ,and neither defense played great.”

Howell, who became the Tar Heels’ first quarterback with over 10,000 passing yards in his junior season, finished with 341 yards on 24-of-31 passing with one touchdown and one interception. He added another 101 yards on 18 carries, one a 31-yard touchdown run that kept the Tar Heels in it at 41-34 with 7:23 to play. It was the third game this season he has passed for over 300 yards and rushed for more than 100.

After Howell's touchdown run, Notre Dame responded with a 13-play, 73-yard drive that ate up 5:46 of the clock, leading to Jonathan Doerer’s third field goal of the game from 21 yards that were the final points of the wild scoring night.

With Notre Dame, which led 17-13 at halftime, clinging to a 31-27 lead early in the fourth quarter, Williams, took a simple handoff from quarterback Jack Coan right and then reversed his field, breaking past defender Tomon Fox.

“I knew I was going to score as soon as I stiff-armed No. 12 (Fox),” Williams said. The Irish running back got a block downfield from tight end Michael Mayer before outracing linebacker Jeremiah Gemmel to the end zone, tying the sixth longest touchdown run in Notre Dame history.

“It’s frustrating because you got them backed up,” Brown said. “That was a 14-point swing. We lost leverage. We had him in the backfield and he bounced out completely. It was one of the best runs I’ve ever seen.”

North Carolina running back Ty Chandler had 3- and 53-yard scoring runs and finished with 83 yards on 15 carries.

North Carolina: Notre Dame never really had a handle on the 6-foot-1 1/4, 225-pound junior Howell, who showed off a talented right arm along with his elusive feet. The Fighting Irish did manage the one interception and also three quarterback sacks. Howell wasn't impressed with the records he broke Saturday night.

“It’s definitely not why I play the game, but it’s not something I take for granted — I'm very blessed,” Howell said, who came into the game with 483 rushing yards this season. “Honestly, it just feels like I'm back to high school. In high school I ran it probably 25 times a game.”

“I think he’s been unbelvieable," Brown added. “We wouldn’t have won as many games as we have without Sam Howell, and he’s helped our recruiting.”

Notre Dame: The Irish played up-tempo most of the game, with Buchner making several appearances in place of Coan whenever the Irish needed to run the ball. Each quarterback threw a touchdown pass in the first half as the Irish took a 17-13 lead to the locker room. Even more important, the Irish did not commit a turnover and Coan was sacked just once.

Coan wasn't surprised by his 21-yard touchdown run in the third quarter.

“I don’t take anything for granted when I’m running,” he said. “I was like, ‘Wow, I’m still going.’ There were a few play calls that had me running the ball. I’m healthy and it’s something I think I can do, and I was excited for it."

Notre Dame entered the game ranked No. 11 and should move up with losses by No. 6 Michigan, No. 9 Iowa and No. 10 Mississippi.