Woman tells police Joseph 'pushed me on couch, strangled me' 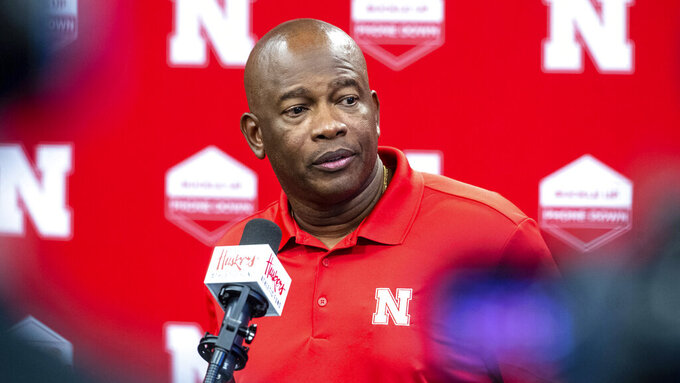 LINCOLN, Neb. (AP) — Mickey Joseph, Nebraska's interim football coach for nine games this season, is accused of putting his hands around a woman's throat, pulling her hair and punching her before being taken into custody, according to a police affidavit filed Thursday.

Joseph, 54, was arrested Wednesday on suspicion of strangulation and third-degree domestic assault. Joseph denied to police that he assaulted the woman. Nebraska placed Joseph on administrative leave.

Joseph made his initial court appearance on video from the Lancaster County Jail on Thursday. He did not enter a plea. His bond was set at $20,000 and he was ordered not to have contact with the alleged victim. His next court appearance was set for Jan. 30. His attorney, Sean Brennan, did not respond to a message seeking comment.

Police went to a Lincoln residence Wednesday afternoon after a report of a domestic disturbance.

The woman said she and Joseph were in an argument when Joseph pushed her, causing her to fall onto a couch. She said Joseph got on top of her and placed his hands around her throat.

“He pushed me on the couch and strangled me,” she said, according to the affidavit. She said her breathing was impeded and that she wasn't able to breathe until she pushed him off.

When she went into the kitchen, she said, Joseph grabbed her hair from behind and pulled her backward, causing her to fall to the floor. In the process of falling, she said, Joseph struck her in the left temple with a closed fist.

Police said she had visible redness and swelling around her left eye which was consistent with being struck, and she was observed to have several strands of hair clinging to her upper pant leg. She said the hairs were pulled from her when Joseph grabbed her.

The Associated Press generally does not identify people who say they have been subjected to extreme abuse. The woman in the Joseph case has not publicly identified herself.

The woman also said Joseph also grabbed her phone and attempted to flush it down a toilet. Police said they saw the phone inside a container of rice on the kitchen counter.

A relative of the woman also was at the residence, and he told police he saw Joseph's hands around the woman's throat and that Joseph pushed her onto the couch after he yelled to him. Joseph left the home and was located by police at another location.

Joseph's arrest came two days after Matt Rhule was introduced as the Cornhuskers’ new head coach. Rhule had said Monday he planned to meet with Joseph to discuss the possibility of Joseph remaining on the staff. Rhule declined comment through an athletic department spokesman.

Joseph is under contract through Dec. 31, 2023, and his annual salary is listed at $600,000. Under terms of the contract, he could be fired for cause if convicted of a misdemeanor or felony that impairs his ability to perform duties on behalf of the university. If a firing for cause is upheld, the university would not have to pay the remaining money owed on the contract.

Joseph was a quarterback for the Cornhuskers from 1988-91 and had run-ins with police during his playing days. He returned to Nebraska last December as receivers coach and was named interim head coach Sept. 11 after Alberts fired Scott Frost. The Huskers were 3-6 under Joseph and finished the season 4-8.