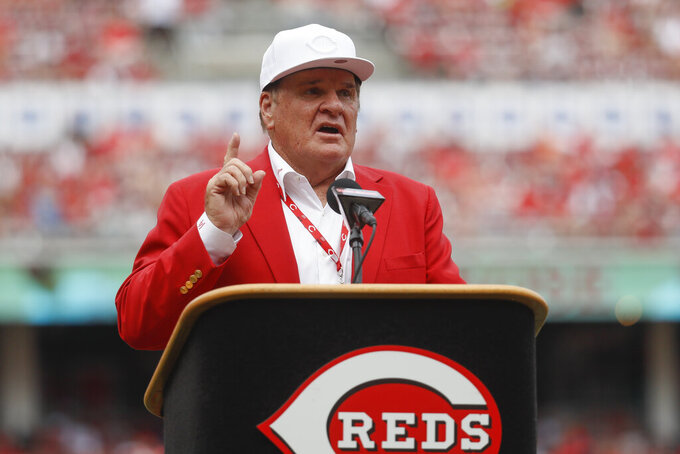 FILE - In this June 17, 2017, file photo, former Cincinnati Reds player Pete Rose speaks during his statue dedication ceremonies before a baseball game between the Reds and the Los Angeles Dodgers in Cincinnati. (AP Photo/John Minchillo, File)

You’ve had time to shelter at home and bone up. Your 2020 year-end sports quiz awaits. Like much else these days, quizzes will be graded on the curve:

The IOC sets conduct guidelines for athletes at the Tokyo Olympics. What does it specifically bar?

a. Therapy pets at the Athletes Village, such as pythons and parrots.

b. Political messages and gestures on the medal stand.

Pete Rose again asks to be reinstated to baseball. His latest reason?

b. Gambling, like baseball, is now a national pastime.

c. He is approaching 80, and enough is enough.

a. “mean farewell to Foxborough.”

Wimbledon is canceled because of the new coronavirus. When was the Grand Slam tournament last called off?

The Bundesliga is the first major soccer league to return during the pandemic. In connection to German soccer, what does the term “Geisterspiele” mean?

a. a defensive soccer tactic.

b. a popular stadium sausage.

c. a ghost game in an empty stadium.

a. a statement by NBA Commissioner Adam Silver on the need to transform social justice.

b. the words on the car hood of Black NASCAR driver Bubba Wallace.

c. the title of a new memoir by UFC star Conor McGregor.

The renamed Washington Football Team might get another rebrand. Which name/logo has NOT been mentioned as a possible choice?

a. The Washington Red Tails; a propeller plane celebrating the famed Tuskegee Airmen.

b. The Washington Red Wolves; a fierce wolf looking up against a silhouette of the Capitol.

c. The Washington Skins; a board-certified dermatologist giving a high-five.

a. hitting a grand slam on a 3-0 pitch with his team way ahead late in the game.

b. calling players who run to first base “lame, sorry losers.”

c. laying down a bunt to break up a no-hitter.

a. it is now assured of daily COVID-19 testing and safety protocols.

b. it feared “withering litigation” from parents and alumni.

c. it would lose streams of recruits to the SEC and ACC.

Which traditional school sports song comes under scrutiny because of its unsavory history?

a. University of Florida — “We Are the Boys from Old Florida.”

b. University of Texas — “The Eyes of Texas.”

Who is Kendall Hinton?

a. a sidelined Vanderbilt kicker whose absence allowed Sarah Fuller to play in a Power Five football game.

b. a practice squad receiver pressed into service as the Denver Broncos’ quarterback.

c. the amateur golfer with the best score at the Masters.

a. for making a tampering overture to Milwaukee Bucks star Giannis Antetokounmpo.

b. for saying Knicks owner James Dolan has made an “unconscionable mockery” of New York basketball.

c. for not speaking to the media during the preseason.