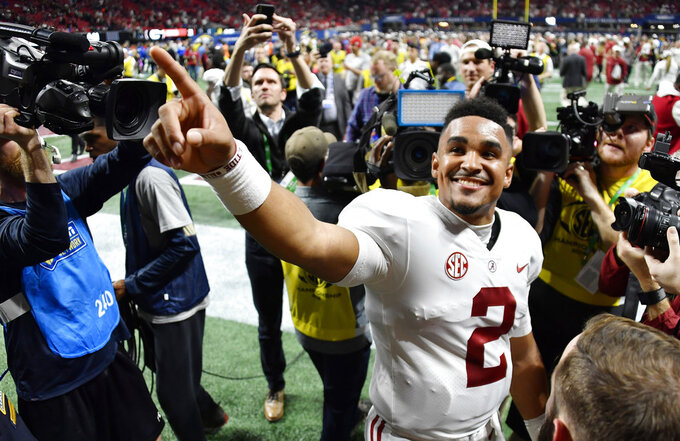 FILE - In this Saturday, Dec. 1, 2018 file photo, Alabama quarterback Jalen Hurts (2) speaks to fans after the Southeastern Conference championship NCAA college football game between Georgia and Alabama, in Atlanta. Alabama won 35-28. Even before Hurts came off the bench to lead Alabama's comeback win over Georgia in the Southeastern Conference championship game, his popularity has only seemed to grow since his role shrank. (AP Photo/John Amis, File) 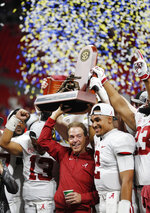 TUSCALOOSA, Ala. (AP) — They cheered Jalen Hurts as he picked up his diploma, and applauded his every big play this season.

Sometimes, Alabama fans gave the backup quarterback a nice hand for even stepping on the field — especially for his fifth game, which assured that he wasn't leaving, at least not right away.

So if he decides to leave Alabama after the playoffs, there probably would be no booing from Crimson Tide faithful.

Even before Hurts came off the bench to lead Alabama to a comeback win over Georgia in the Southeastern Conference championship game, his popularity only seemed to grow since his role shrank.

"Jalen is a special guy. Everybody knows that," said Alabama tailback Damien Harris, Hurts' roommate. "The character he embodies, the way that he has handled this entire situation has been remarkable."

Backup quarterbacks are often popular among fans when the starter is struggling. Hurts, however, found himself as the understudy to Tua Tagovailoa , who wound up as the Heisman Trophy runner-up.

He stuck it out while other players like ex-Clemson quarterback Kelly Bryant opted to transfer instead of burning a year of eligibility. Hurts also has reaped the rewards, including perhaps a third national championship if Alabama can beat Oklahoma in the Orange Bowl on Dec. 29, plus either Clemson or Notre Dame.

He also cemented his Alabama legacy with his performance in the SEC title game.

Hurts replaced an injured Tagovailoa in the fourth quarter against the Bulldogs. He passed for a touchdown and ran 15 yards with 64 seconds left for what proved the winning score.

When Hurts graduated last Saturday, he received a 30-second ovation when his name was called.

Alabama coach Nick Saban touts Hurts' story as "a great message for all young people" about sticking with something even through adversity.

"I think a lot of people recognize the fact that he put the team first," Saban said. "He stayed here and focused on improving, trying to get better, trying to help the team, getting ready for any opportunity that might present itself for him. I think we played to get him ready for that.

"When it did in the last game, the SEC championship game, he certainly came through in fine fashion."

Hurts hasn't provided a hint about his plans after this season, with one more year of eligibility remaining. He could easily become a coveted transfer option if not "the biggest free agent in college football history" as father Averion predicted last spring.

Both Hurts and his father declined interview requests for this story.

It wasn't always a smooth relationship for a two-year starter suddenly having his job challenged.

Hurts was miffed when Saban said at SEC media days that he had "no idea" if the quarterback was staying put. Hurts insists he told Saban of his intentions in June, and Tide tailback Josh Jacobs said he gave teammates those assurances as far back as last spring.

"It worked out great for him," Jacobs said.

Hurts played in all but two games this season, missing those because of an ankle injury. The SEC offensive player of the year as a freshman has completed 74.6 percent of his passes for 755 yards and eight touchdowns against two interceptions.

He went 26-2 as a starter the previous two seasons and has set an Alabama record for a quarterback with 23 rushing touchdowns. Hurts also ranks among the top three career leaders in total offense, touchdown passes and rushing yards by a quarterback.

He also has ensured that the enduring memory of his career won't be getting benched for the second half of the national title game. Tagovailoa led the Tide to a second-half comeback victory over Georgia in the same building where Hurts would return the favor 11 months later to win the SEC.

The next day Hurts recounted the emotional aftermath of the bittersweet ending in January, where Hurts publicly kept a happy face and celebrated the title. He only showed the hurt in private.

"After the national championship game I'm in the hotel room with my family, and I'm in my mom and dad's arms crying, asking, 'What are we going to do now?'" Hurts told ESPN on Dec. 2. "My dad looked at me and said, 'We're going to fight.'"

Whether at Alabama next year, or someplace else.