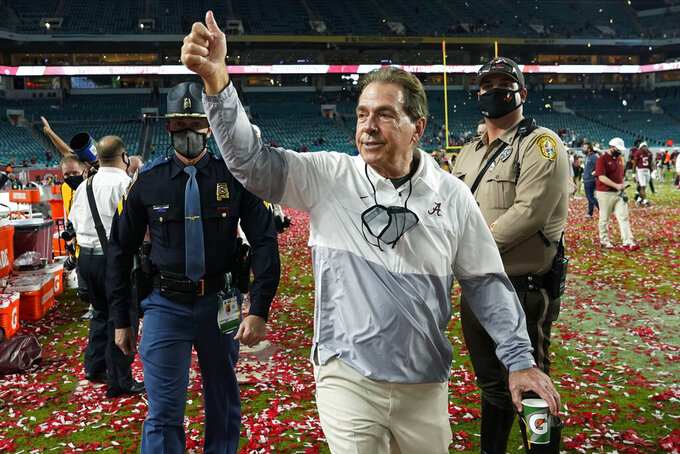 FILE - Alabama head coach Nick Saban leaves the field after their win against Ohio State in an NCAA College Football Playoff national championship game in Miami Gardens, Fla., in this Tuesday, Jan. 12, 2021, file photo. Saban, who has won a record seven national championships, has agreed to a three-year contract extension running through the 2029 season. Alabama announced the extension on Monday, June 7, 2021, including $8.425 million in base salary and talent fee for the current contract year with annual raises of unspecified amounts. (AP Photo/Lynne Sladky, File)

TUSCALOOSA, Ala. (AP) — Alabama coach Nick Saban, who has won a record seven national championships, has agreed to a three-year contract extension running through the 2028 season.

Alabama announced the extension on Monday, including $8.425 million in base salary and a talent fee for the current contract year with annual raises of unspecified amounts.

The 69-year-old Saban, who has led the Crimson Tide to six national championships since taking over in 2007, will receive an $800,000 “contract completion benefit” after each contract year from 2022-25.

Saban said in statement that he and his wife, Terry, “are pleased and happy to sign another contract extension that will keep us in Tuscaloosa through the end of our career. Our family calls Tuscaloosa and the state of Alabama home, it’s a place where our roots now run deep."

He signed a new eight-year deal in 2018 worth at least $74.4 million, including $400,000 annual raises and three payments of $800,000 for completing contract years. That made him college football's highest paid coach.

Saban was scheduled to make $9.3 million last year, which placed him again at the top, according to USA Today's database of college football salaries. LSU's Ed Orgeron, Clemson's Dabo Swinney and Michigan's Jim Harbaugh also topped $8 million, according to the database.

Alabama won another national championship in Saban's 14th season this January with his second perfect record with the Tide. It was a record seventh national title for Saban, who also won the 2003 BCS crown at LSU, breaking a tie with former Alabama coach Bear Bryant among FBS coaches.

He has led Alabama to seven Southeastern Conference championships and a 170-23 on-the-field record (five wins were vacated in 2007 due to NCAA infractions).

“Coach Saban is the best college football coach in the nation, and one of the greatest coaches of all time in any sport, and we are extremely fortunate that he has agreed to another contract extension at Alabama,” Tide athletic director Greg Byrne said.

Alabama has been ranked No. 1 in The Associated Press poll for at least one week for 13 straight years, breaking the previous record of seven set by Miami from 1986-92.

Alabama’s 127 wins over the past decade is the best 10-year run by any FBS school during the AP poll era going back to 1936.

The financial terms of the contract remain subject to approval by the University of Alabama System Board of Trustees, who have been notified of the proposed terms and conditions.