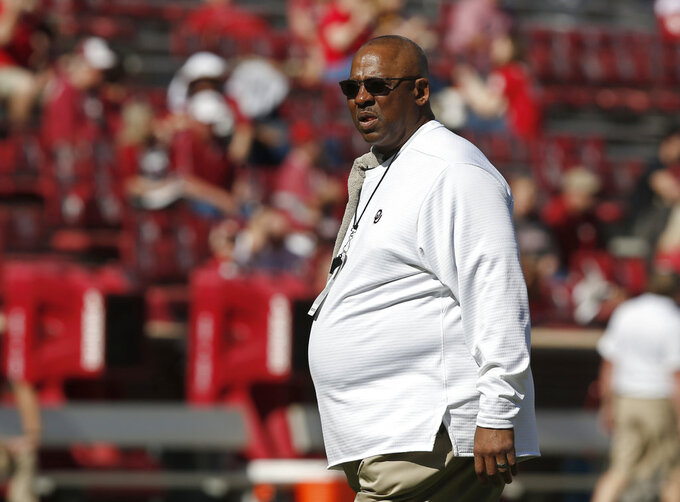 FILE - In this Oct. 27, 2018, file photo, Oklahoma defensive coordinator Ruffin McNeill watches players before an NCAA college football game between Kansas State and Oklahoma in Norman, Okla. The Sooners played so poorly in a 48-45 regular-season loss to Texas that they fired defensive coordinator Mike Stoops. The numbers actually got worse under McNeill, but the past two games offered glimmers of hope. (AP Photo/Sue Ogrocki, File)

His toughest challenge yet will come in the national semifinal against Alabama. Led by Heisman Trophy runner-up Tua Tagovailoa at quarterback, the Crimson Tide rank second nationally in points per game and seventh in yards per game. And if Tagovailoa isn't ready for the Orange Bowl on Saturday after injuring his ankle against Georgia in the SEC Championship Game, Jalen Hurts, last year's starter, is waiting in the wings.

That's bad news for an Oklahoma squad that has struggled defensively. The Sooners played so poorly in a 48-45 regular-season loss to Texas that they fired defensive coordinator Mike Stoops. The numbers actually got worse under McNeill, but the past two games offered glimmers of hope. Oklahoma beat West Virginia in its regular-season finale, and while the Sooners gave up 704 yards, they also scored two defensive touchdowns. The Sooners were solid in a 39-27 victory over Texas in the Big 12 title game .

Oklahoma coach Lincoln Riley has been complimentary of McNeill's performance since the switch.

"I'm excited about the direction we're headed there," Riley said. "Ruffin has been a huge part of that. We've played some of our best ball here in the end. We have a chance to play even better in the next couple."

"They've grown a lot in the throw game," Riley said. "They certainly have been a little more explosive than maybe they've been in the past. They're doing a great job schematically, doing it with great athletes, they've got two good trigger guys and a really good O-line. They've got all the ingredients, no doubt. They've done a tremendous job offensively. It's going to be a lot like what we see often."

The Sooners are preparing for both Tagovailoa and Hurts, who rallied the Crimson Tide to victory over Georgia in the SEC title game .

"The downside for us is they both have a lot of great experience and have been a part of a lot of wins for them," Riley said. "It's a double-edged sword. I think we're not going to be totally surprised by what we see out of either guy, but they are certainly difficult to stop."

"They're a really good group," Alabama left tackle Jonah Williams said. "I think there's kind of a narrative that they're not, and that's a product of the stats that people put up in the Big 12. I think they have talented guys. They're going to pose a lot of challenges. They fly around. They've made big plays in big games."

Yet the statistics are there. Oklahoma ranks 128th out of 129 schools in passing yards allowed per game, 127th in red-zone defense, 116th in third-down defense and 108th in total defense. The Sooners allow 32.4 points per game, 96th nationally. They allowed at least 40 points in each of their last four regular-season games.

Alabama is doing its best not to get caught up in any of that.

"I don't think it means anything at all," running back Damien Harris said. "We know that they wouldn't be in the playoff if they weren't capable of having a good defense. We're not really going to look at any stats, how many yards they give up and stuff like that. We're just going to worry about how we can go out there and play our best game on offense."