Alabama's Anderson: 'We're in our own way right now' 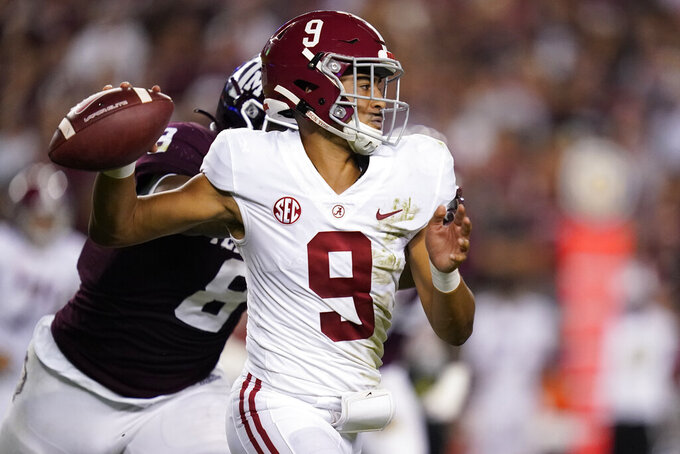 Will Anderson Jr. thought a close call against Florida would be “a real eye-opener” for Alabama at the time. Now, he's not so sure the message sunk in.

Not after the fifth-ranked Crimson Tide lost 41-38 to a Texas A&M team that had been on a two-game losing streak.

“I don’t think it was taken seriously," Anderson, Alabama's star linebacker, said Monday. "I mean, as you can see, after Florida — which was a close game — we end up losing this game.

“I think together as a team we really just have to focus. I think that’s the biggest thing,” Anderson said. “I just feel like as if it’s really nothing else other teams are doing, I just think it’s just us, we’re in our own way right now.”

Alabama (5-1, 2-1 Southeastern Conference) dropped from the No. 1 spot and left no margin for error in its league title and playoff ambitions entering Saturday night's visit to Mississippi State (3-2, 1-1). Texas A&M climbed back into the poll at No. 21.

The Tide had only been really tested once before, winning 31-29 over Florida in the Swamp.

The short-term priorities are correcting the array of issues that plagued Alabama, everything from red zone offense to pass rush to pass protection.

Alabama, which had won a record 100 straight against ranked opponents, only has one more Top 25 opponent remaining. That’s No. 17 Arkansas on Nov. 20 at Bryant-Denny Stadium.

Tide coach Nick Saban thinks the key this week is making sure the players and coaches “respond the right way to the things that we need to fix.”

Then there's the mental aspects for a team that hasn't lost back to back regular season games since dropping the final four in 2007, Saban's debut season.

Some players, like Anderson, haven't had to rebound from a loss since they arrived in Tuscaloosa. After all, they went undefeated en route to a national title last season.

Saban wants them to remember the feeling, something he has in the past referred to as not wanting to “waste a failure”.

"So when I say how do we respond to this, that’s what I’m talking about, you know, how do you respond to the feeling that you had when you didn’t have success and what are you willing to do to fix it,” Saban said.

Alabama has been adept at starting fast this season, but managed only a field goal on the next six possessions after a touchdown on the opening drive. The Aggies had three sacks in the second quarter and four in the game.

And Texas A&M quarterback Zach Calzada picked apart the secondary in the first half, when he completed 13 of 14 passes for a 24-10 lead.

The Tide defense, meanwhile, didn't produce a sack and wasn't credited with any quarterback hurries. Alabama had a chance to take the lead in the fourth quarter but passed three straight times after getting first and goal from the 3 and settled for a field goal to pull to within 31-30.

It prompted former Tide receiver DeVonta Smith, last season's Heisman Trophy winner, to Tweet: “RUN THE DAMN BALL !!!!” Saban himself seemed to wonder why Alabama didn't run the ball in that situation. He was asked what the Aggies did in the red zone to make it hard for Alabama to run the ball.

“I don’t know that there’s a good answer to that,” the Tide coach said. “I don’t know if we challenged them running it as much as maybe we could.”

Tailback Brian Robinson Jr. thinks the overall message “is that all the little things matter.”

“If you aren’t buying this stuff to be a winner, it will come back to bite us at a bad time,” Robinson said. Saban is ”always on us about staying on the little things, and if something goes wrong, he makes sure we know why it didn’t go" right.

Only time will tell how well the message takes this time.