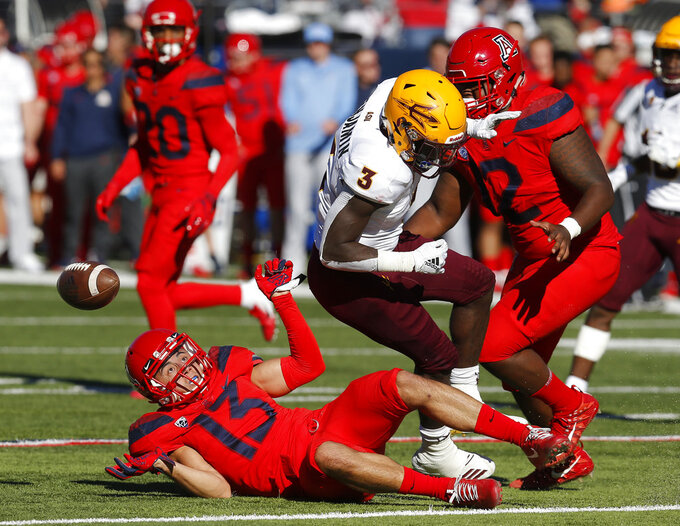 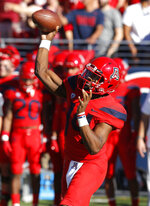 Arizona State's defense held up its end with two turnovers. The offense got the buckets. And when one last-second Arizona field goal attempt sailed right, the Sun Devils had the Territorial Cup back in their hands.

Eno Benjamin scored on a 22-yard touchdown as Arizona State rallied from a 19-point deficit to beat rival Arizona 41-40 on Saturday.

"We were just poised, trusted the game plan, nobody pointing fingers when something went wrong," said Wilkins, who threw for 265 yards and a touchdown. "That's why we finished with one more point than they did."

Benjamin burst up the middle, cut outside and finished off his third touchdown of the game to put the Sun Devils up 41-40 with 3:08 left.

The Wildcats got the ball back and marched down the field, but Josh Pollack, who made four field goals, pushed a 45-yard attempt wide right with 11 seconds left.

"This will sound crazy, but we're comfortable there; we're not in a panic," Arizona State coach Herm Edwards said. "We just kind of keep fighting. That's the DNA of the players."

The Wildcats leave with an excruciating loss in their biggest game of the season. Arizona not only blew a big lead to lose to its biggest rival, it lost a chance to play a bowl game in coach Kevin Sumlin's first season.

Tate threw for 282 yards and three touchdowns, and Taylor had 144 yards on 28 carries for Arizona.

"The biggest issue was the two turnovers on your side of the 50," Sumlin said.

Left with one final shot at a bowl game, Arizona jumped on it early, racking up yards in good-sized chunks.

Tate hit Ellison on a 28-yard touchdown in the first quarter and Shawn Poindexter scaled over ASU cornerback Kobe Williams in the end zone for a 23-yard score.

The Wildcats had to settle for Pollack field goals on three trips into the red zone, though, including a 36-yarder on the final play of the first half to put Arizona up 22-14.

Wilkins hit Brandon Aiyuk on a 58-yard scoring pass and Benjamin bulled his way in for a 10-yard TD to keep the Sun Devils within reach.

Arizona started quickly in the second half as well.

PJ Johnson tackled Benjamin in the end zone for a safety, then Taylor returned the kickoff 66 yard to set up Pollack's fourth field goal.

Benjamin scored on a 14-yard run, but Gary Brightwell answered with a 35-yard scoring run. Tate then hit Ellison on a jump pass for an 8-yard score to put the Wildcats up 40-21.

Seemingly on their way to a bowl game, the Wildcats couldn't hold the lead, losing the game and their postseason bid.

"The circumstances of this year were different, we wanted to be better," Sumlin said. "We had a lot of moving parts this year."

The Sun Devils defense struggled all game before coming up with the biggest plays when they needed them most.

The Wildcats had bowl eligibility within their grasp, only to let it slip through in the fourth quarter. This one will hurt.

Benjamin entered the game third nationally with 1,444 yards rushing and needing 122 yards to break the school single-season record. He came up short, finishing with 80 yards on 21 carries, but ended up with the winning TD run.

Sumlin said the team would gather information before Tate makes a decision whether to return for his senior season in 2019. Tate threw for more than 2,500 yards and 26 TDs this season, but was far less of a running threat in Sumlin's system than he was last season, finishing with 224 yards after racking up more than 1,400 yards a year ago.

Arizona State will play in a bowl game for the seventh time in eight seasons.