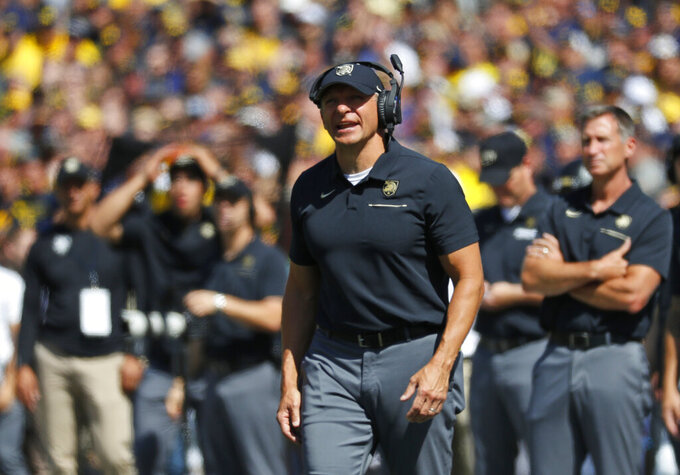 FILE - In this Sept. 7, 2019, file photo, Army coach Jeff Monken watches during the first half of the team's NCAA college football game against Michigan in Ann Arbor, Mich. Army faces VMI on Saturday, Monken says he never gets too emotional on Senior Day. This time might be different. In his six seasons at West Point, Monken has transformed the Black Knights from an afterthought into a team to be reckoned with, and this senior class of 30 has been an integral part of that transformation. (AP Photo/Paul Sancya, File)

WEST POINT, N.Y. (AP) — Army coach Jeff Monken says he never gets too emotional on Senior Day. This time might be different.

In his six seasons at West Point, Monken has transformed the Black Knights from an afterthought into a team to be reckoned with, and this senior class of 30 has been an integral part of that transformation.

Army was undefeated at Michie Stadium the previous two seasons, a span of 15 straight games before losing to Tulane in September. Overall, the Black Knights are 33-16 and have won three straight bowl games since this class arrived on campus.

“Hopefully, the football program that they’ve been a part of has really mirrored what we’re trying to teach in terms of our missions in the academy, that they’ve learned to be team players, to give their best for the people next to them,” Monken said. “I hope they’ve learned mental toughness, and that comes with some of the highest of the highs and lowest of the lows. You’ve got to be mentally tough to handle both of those situations.

The goodbye game for the seniors will be Saturday against military foe VMI (4-6) of the Championship Subdivision. Army (4-6) snapped a five-game losing streak last week with a 63-7 victory over UMass and still can reach six wins to qualify for the postseason.

“We were really glad to get a win,” said Monken, 39-34 at West Point and one victory shy of matching Tom Cahill (1966-73) for fourth all-time in wins at the academy. “We desperately needed one.”

The Keydets have lost three straight, the last a 60-21 setback a week ago at No. 9 Furman, but they’re more familiar than most teams with the option.

“We’ll be the fourth option team that they’ve faced this year,” Monken said. “They do some unique things against the option teams that you don’t often see.”

VMI is averaging 33 points behind junior QB Reece Udinski, 264-of-409 passing for 2,844 yards and 17 TDs with just three interceptions, and TB Alex Ramsey, who’s averaging 121 yards rushing and leads the FCS with 22 TDs and 134 points. Ramsey, a redshirt junior, has four straight 100-yard games to bring his season yardage total to 1,210, second nationally. He also has 1,501 all-purpose yards, thanks to 41 receptions for 291.

“Offensively, we’ve just got to keep executing at a high level,” said VMI coach Scott Wachenheim, a graduate of the Air Force Academy. “The players have worked extremely hard. They have a never-say-die attitude, which is what VMI is all about.”

Army is ranked seventh nationally in rushing at 273.5 yards per game, well behind their two top foes, No. 19 Navy (357.9) and Air Force (323.1). But the Black Knights have scored 33 TDs rushing, tied with Air Force and just three behind the Midshipmen, and they’ve also have been adept at sneak attacks . Army has three plays of 80 or more yards this season, tied for the national lead with Oklahoma.

Army offensive coordinator Brent Davis held the same job at VMI from 2006-09 before joining Monken’s staff at Georgia Southern for four seasons and then coming north with him to Army. Even though this isn’t a service academy game, it’s special for those involved.

“Their kids certainly make a commitment different than a typical college as well. It's a unique military school experience there,” Monken said. “I think it’s great any time that military schools can play each other and battle. I know it’s a source of pride for both sides to be able to play another military school and to try to win the game.”

Senior Day at West Point is a little different because it’s never the last game of the regular season. Still on the horizon this year is a date with Hawaii in late November and, of course, Navy in the traditional regular-season finale in December where emotions are always extreme.

This will be the 16th meeting all-time between Army and VMI, all of them at Michie Stadium. The Black Knights have lost only once to the Keydets — 14-7 in 1981.