Back to Philly: Geogia Tech's Collins faces his former team 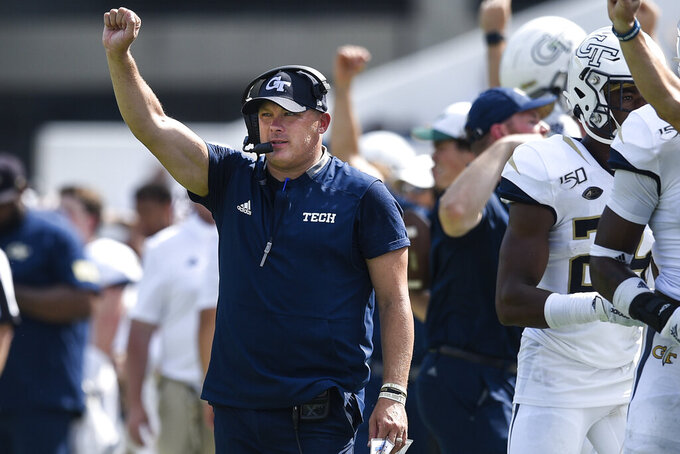 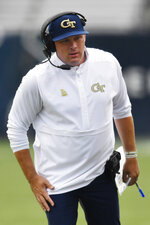 He's got bigger issues to fret about as he leads the struggling Yellow Jackets against his former school.

Collins coached the last two seasons at Temple, guiding the Owls to a pair of winning records before he left to take over at what is essentially his hometown school.

"Obviously, we had a special time there," said Collins, who returns to Philadelphia on Saturday — only this time, he'll be coaching from the visiting sideline. "There will be strong feelings. But we're making sure we reel those in and focus on ourselves so that we're able to prepare ourselves to play at a high level against a really good opponent."

Collins knew he faced a difficult job at Georgia Tech (1-2), which ran the triple-option for the past 11 years under former coach Paul Johnson. Inheriting a roster full of players who were trained in the run-oriented system, the Yellow Jackets are nevertheless pushing forward with the transition to an up-tempo, pro-style offense.

Through three games, it's gone about how most everyone expected.

Georgia Tech was routed in its season opener against defending national champion Clemson, struggled to beat South Florida, and was embarrassed at home by FCS school Citadel.

After an off week, the Yellow Jackets are preparing to face the Owls (2-1), who had an impressive victory over then-No. 21 Maryland but are coming off a 38-22 loss at Buffalo.

Collins said he is strictly focused on his own program, not his former one.

"We don't panic," he said Tuesday. "We know we're going to get better."

But Temple will always hold a special place for the 48-year-old Collins. It was his first head coaching job, his first chance to try out some of his philosophies and techniques he would bring with him to Georgia Tech.

"You form bonds that will last a lifetime," Collins said. "I am blessed to have had that opportunity."

But he lasted only two years. When Georgia Tech called, Collins couldn't turn it down. He was born and raised in suburban Atlanta, which he believes should lessen any hard feelings about his decision to leave the Owls before their appearance in the Independence Bowl last season.

With Ed Foley serving as interim coach, Temple was blown out by Duke 56-27.

"I think the players who are there understand how important Atlanta is to me," Collins said. "I made no bones about how much I loved Atlanta, even while I was up there and really at any stop that I've been at. My grandmother, who is 80 years old now, the first three weeks of the season she's seen me coach more football games than she had in the previous 11 years of my coaching career. She's seen my 3-year-old daughter more in the last three months more than she had in the previous three years. As you get older in the coaching profession, those things matter."

Dave Patenaude, who came with Collins from Temple to serve as offensive coordinator, said he still keeps up with the Owls' scores and occasionally texts with his former players.

Not this week, though.

"We have ultimate tunnel vision," Patenaude said. "You reflect back on it maybe after the game and say, 'Hey, that was interesting.' But our whole focus is getting our guys ready to play. There's no external piece to this. Coach doesn't even talk about them."

Collins has retained many of the methods that served him well at Temple, right down to a revised version of his weekly web series, now known as "Waffle House Wednesday " instead of "Cheesesteaks With Coach."

While there are no Waffle Houses in Philly, Collins was quick to point out that he still managed to find one — in neighboring Delaware. He even featured it on Season 2, Episode 2 of his "Cheesecakes With Coach" series.

"There was one an hour and 17 minutes away," Collins recalled, breaking into a big smile. "I have gone to it and had a great meal."

He has no trouble locating a Waffle House these days. There seems to be one on every corner in metro Atlanta.

His vision for a winning program?

That seems much farther down the road.