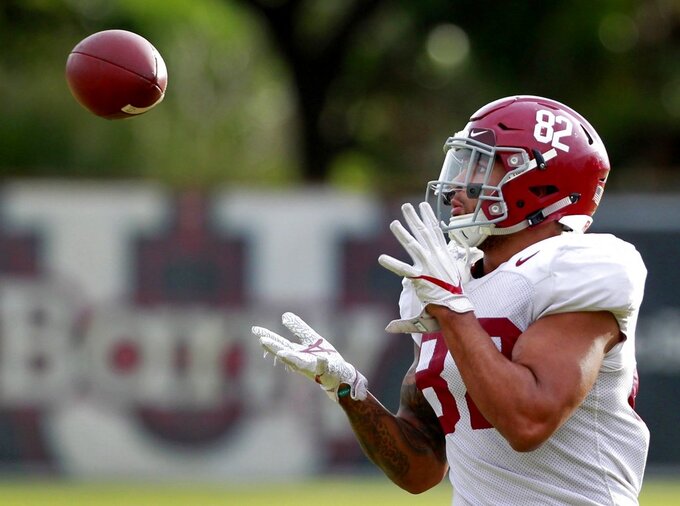 TUSCALOOSA, Ala. (AP) — Alabama's Irv Smith Jr. was determined to be a wide receiver in high school.

Never mind that he's the son and nephew of former NFL tight ends and is built for that position, too.

He caved to the reality his junior year at Brother Martin High School in New Orleans and moved to the family's favored position fulltime. Now, he has become a dangerous option for the Crimson Tide as both a pass catcher and blocker heading into Monday night's national championship game against Clemson in Santa Clara, California.

"He finally realized that you don't have to be a wide receiver to get a lot of glory," said Irv Smith Sr., a former first-round draft pick by the New Orleans Saints.

It took two years of high school for the 6-foot-4, 241-pound Smith to fully embrace life as a blocking/catching tight end, and two more at Alabama before he started getting any recognition.

Smith, whose uncle Edward played for three NFL teams from 1997-99, has emerged from O.J. Howard's shadow.

He has been a beneficiary of a more explosive, pass-oriented Alabama offense led by quarterback Tua Tagovailoa and coordinator Mike Locksley .

Smith went from 14 catches last season to 40 for 667 yards and seven touchdowns as a senior. Even Howard, who became a first-round draft pick, never matched those numbers.

But Howard's performances against Clemson will be awfully hard to top. He caught a 68-yard touchdown pass in a title game loss, and more than topped that a year later.

"He made a bunch of plays in those games," Smith said of Howard's performances. "It's motivating for me as well because I obviously want to come out and have a big game. It was awesome seeing him do that.

"I was behind him so obviously I was cool with seeing that. I feel like it's my turn now."

In case Locksley has forgotten about Howard's success against Clemson, Smith joked that "I'm going to definitely talk to him, for sure."

Smith had stretches this season where he caught touchdown passes in four straight games and also had 50-plus receiving yards four times in a row at one point.

He scored on a 76-yard touchdown on Alabama's first play against Arkansas.

Smith certainly has had far more balls thrown his way this season. But his father has also seen him improve "in leaps and bounds" each season in Tuscaloosa. The younger Smith didn't have a catch in nine games as a freshman, when his father said his movements on the field were stiff and robotic as he tried to get acclimated to a different level of football.

That started to change last season when he was more fluid and comfortable and showed his progress with a pancake block in the opener against Florida State.

The Alabama tight end knew he had a chance to get targeted with Locksley emphasizing he wanted to get more playmakers involved .

Tide defenders who have faced him in practice aren't surprised, either.

"He's big like a tight end but he has skills like a receiver," middle linebacker Mack Wilson said. "He's fast. He runs precise routes."

And now Smith gets a chance to try to make an impact in the national title game. He didn't have a catch in last season's championship matchup with Georgia.

No one is predicting a 200-yard performance like Howard's. Irv Sr., who was used mostly as a blocker at Notre Dame, knows for tight ends that kind of performance, "only happens once in a lifetime."

His son has more modest expectations though Irv Sr. said, "He definitely wants to ... have a great game."