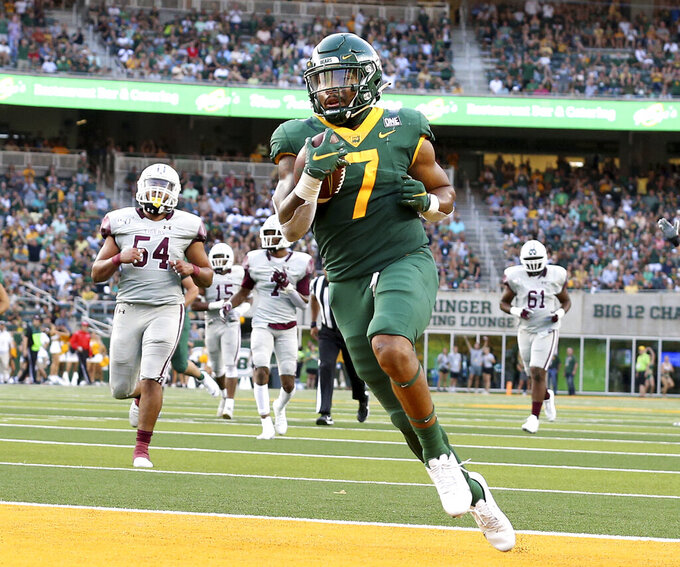 Baylor running back Abram Smith (7) scores a touchdown against Texas Southern in the first half of an NCAA college football game, Saturday, Sept. 11, 2021, in Waco, Texas. (Jerry Larson/Waco Tribune-Herald via AP) 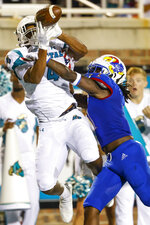 LAWRENCE, Kan. (AP) — Dave Aranda should know how Kansas coach Lance Leipold must feel these days, getting thrown into a rebuilding job at a Division I school in the midst of a pandemic that has made just about everything more challenging.

After all, he went through the same thing last year at Baylor.

The Bears played just nine games, all against Big 12 opponents, after an offseason that didn't really happen. And that made it difficult for Aranda, a longtime college assistant, to put in place everything he wanted after coming over from LSU.

Spring scrimmages? Oh, how Leipold would have liked to have some of those.

Somehow, Leipold managed to do both, and the frantic offseason produced a season-opening win over South Dakota. The Jayhawks were dealt a reality check last weekend, when they were trounced on the road by No. 17 Coastal Carolina.

Leipold has been similarly encouraged by the first two weeks of the season. Quarterback Jason Bean has flashed some playmaking ability, the running game has been getting better and a dreadful defense has been faster and more athletic than in previous years.

The next step is to turn all those positive signs into a Big 12 win.

“For those of us that are new, it's hard for us to really gauge and it's hard to get into heavy comparisons,” Leipold said. “I like where we’re trending. I said even last week with a win, we’re going to have positive things happen that aren’t going to show up on the scoreboard. We have to notice those but not get into moral victories.”

The Jayhawks are one of eight teams in the Football Bowl Subdivision that have yet to turn the ball over this season. “Yeah,” Leipold responded when hearing that stat this week, “if we turn it over Saturday I'm looking at you.”

“It's so important every year,” Leipold added. “When you're winning turnover battles, it gives you a better chance to win.”

Baylor safety J.T. Woods was the Big 12 co-defensive player of the week after making three tackles and returning a fumble 97 yards for a touchdown against Texas Southern. It was the longest fumble return for a score in school history.

This will be the first time Kansas has played on college football’s traditional day after back-to-back Friday night contests dictated by TV schedules. That’s helpful when it comes to recruiting, allowing the Jayhawks a better chance to get players on campus for game day — most of them have prep games on Friday nights.

If nothing else, the Jayhawks should provide a little more resistance than Texas Southern, which allowed Baylor to do the following: produce three 100-yard rushers, run for 419 yards on 43 carries, pile up 714 yards of total offense and score the most points of any team since a 66-7 victory over — coincidentally — Kansas on Oct. 10, 2015.

“I knew we were moving the ball really good, but I didn’t know we had 700-something yards,” Bears quarterback Gerry Bohanon said. “That’s something coach challenged us with this week. Everybody was literally, ‘One play at a time.’”

“In looking at their two games, you can see the correlation with their Buffalo tape,” Aranda said. ”There is a real strong identity of what they’ve got. So we have to prepare for how they play more so than what they’re doing.”