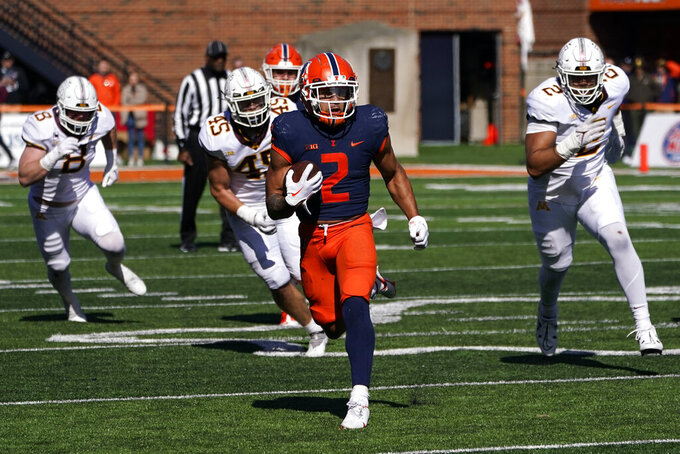 Illinois running back Chase Brown carries the ball during the second half of an NCAA college football game against Minnesota, Saturday, Oct. 15, 2022, in Champaign, Ill. (AP Photo/Charles Rex Arbogast) 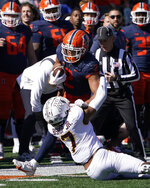 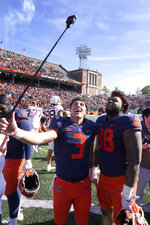 “If there’s a better player in college football who has had an effect on his program," Bielema said, “I’d like to know who it is.”

Brown rushed for 180 yards on a career-high 41 carries and caught a 40-yard touchdown pass to complement the No. 24 Illini's strong defensive performance in a 26-14 victory over Minnesota on Saturday.

The Illini (6-1, 3-1) became bowl-eligible for the first time since 2019 with their fifth straight win. They'll go into their off week tied for first in the Big Ten West.

Brown has a lot to do with it. But he might have to take it easy for a bit after setting a Bowl Subdivision season high for single-game rushing attempts.

“(Ice) tub and tub again,” Brown said. “Just live in the training room for the next two weeks.”

Brown became the first player to go over 1,000 yards for the season. He has a nation-leading 1,059 after running for 1,005 last year. His average number of carries per game has increased from 17 last year to 27.

“It hurts," he said, "but I just have got to take my recovery to a whole new level and just come back stronger. Use this bye week to get my body back and come back explosive against Nebraska.”

Mohamed Ibrahim rushed for 127 yards, his nation-leading 14th straight 100-yard game and the bulk of the Gophers' 180 total yards. It was the fewest yards against Illinois by an FBS opponent since at least 2000.

Minnesota quarterback Tanner Morgan, held to just 21 yards on 4-for-12 passing, left early in the fourth quarter after taking a hit to the head. Athan Kaliakmanis entered for the Gophers (4-2, 1-2) and was intercepted twice.

Illinois quarterback Tommy DeVito, back from an ankle injury that forced him out of last week's game at Iowa in the first half, ran for a 5-yard touchdown early in the third quarter to put the Illini up 20-14. He completed 25 of 32 passes for 252 yards and a touchdown.

“We’re going bowling in October, and that’s a really good feeling,” DeVito said. “But I don’t think that’s the team’s goal. I think we want to go way past that. But it’s just another notch in our belt.”

Brown recorded his eighth straight 100-yard game and has 13 for his career, second most at Illinois behind Robert Holcombe's 16 from 1994-97.

Bielema said Brown “takes incredibly good care of his body," but promised he would have a light week after carrying the load against the Gophers.

“He won't be doing much this week,” Bielema told reporters. “You guys could hang out with him for all I care."

Brown got wide open on a wheel route for his 40-yard touchdown to finish Illinois' nine-play, 75-yard drive to start the game. Fabrizio Pinton tacked on a 31-yard field goal to give the Illini a 10-0 lead early in the second quarter.

Ibrahim was about all Minnesota had going offensively. The Gophers were just 2 of 7 on third downs and finished with their fewest yards since gaining 133 against Wisconsin in 2017.

No opponent had scored a touchdown at Memorial Stadium this season before Morgan's 9-yard run in the middle of the second quarter. The play capped an eight-play, 80-yard drive the Gophers were unable to replicate the rest of the game.

Quentin Redding's 92-yard return of the second-half kickoff set up Ibrahim's 4-yard touchdown, which gave the Gophers a brief 14-13 lead.

Illinois offensive lineman Alex Palczewski said he expects he and his teammates to stay humble as winning raises their profile. That especially goes for Brown, who could start getting some Heisman Trophy buzz.

The Gophers have dropped in the West standings, but that doesn't mean they won't bounce back in a wide-open division race.

“We have a chance to respond, learn from this game and move on for the next,” sixth-year center John Michael Schmitz said.

Minnesota: Just as Ibrahim returns from an injury, Morgan exits. The extent of the sixth-year quarterback's injury could factor heavily into how the Gophers finish.

Illinois: The Illini have won six straight home games, four in a row against Big Ten West oponents and are out to their best start since 2011. With DeVito healthy, the Illini could be favored in each remaining game except for a Nov. 19 trip to No. 5 Michigan.

No. 19 Kansas' loss to Oklahoma might allow the Illini to move up.

Minnesota: A challenging trip to No. 10 Penn State next Saturday.

Illinois: An open date precedes an Oct. 29 visit to Nebraska.