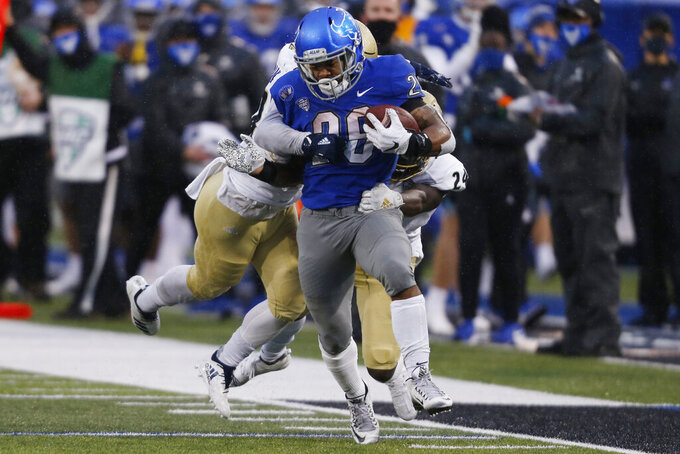 Buffalo running back Jaret Patterson (26) carries the ball during the first half of an NCAA college football game against Akron in Amherst, N.Y., Saturday, Dec. 12, 2020. (AP Photo/Jeffrey T. Barnes)

AMHERST, N.Y. (AP) — Buffalo’s Jaret Patterson tied an FBS record on Saturday when he became the 12th player to surpass 1,000 yards rushing in the first five games of the season.

In his first action since becoming the fourth FBS player to rush for more than 400 yards in a game, Patterson topped 1,000 yards on a 40-yard run in the second quarter of the 24th-ranked Bulls’ game against Akron.

Stanford’s Bryce Love in 2017 was the last FBS player to rush for more than 1,000 yards in his first five games of the season. Heisman Trophy winners Marcus Allen, Barry Sanders and Ricky Williams also are among the players to accomplish the feat.

Named this week as one of 10 semifinalists for the Doak Walker Award, Patterson entered the game leading the nation in rushing yards per game (230) and yards per carry (8.6). He tied an FBS record with eight rushing touchdowns against Kent State and his 409 yards were the second-most ever by an FBS player. Patterson rushed for 301 yards in his previous game against Bowling Green and has scored at least two touchdowns in all five games this season.