California hosts Arizona in Pac-12 opener for both teams 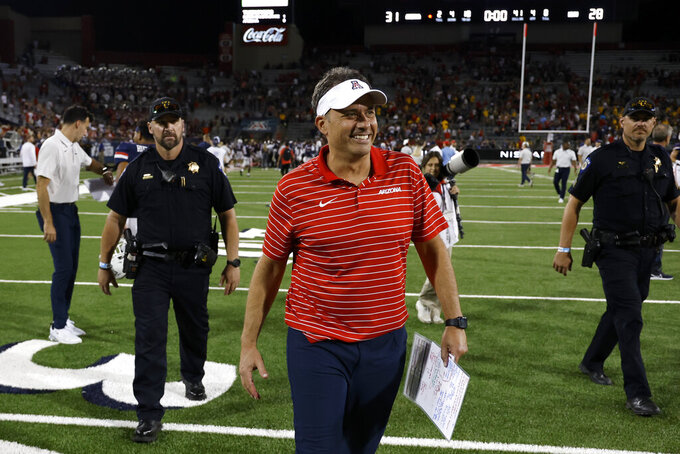 Line: California by 3 1/2, according to FanDuel Sportsbook.

The Wildcats and Golden Bears are both seeking a fast start in conference play when they meet in their Pac-12 opener. Both teams won two of three in nonconference play with Cal losing its game last week at Notre Dame and Arizona falling the previous week to Mississippi State. Arizona has already exceeded its win total from the previous two seasons combined.

Arizona run defense vs Cal RB Jaydn Ott. The Wildcats got gashed for 283 yards and three TDs last week on the ground against North Dakota State and now will have to deal with Cal's dangerous freshman running back. Ott was held in check last week with just 33 yards rushing on 13 carries after gaining 198 yards from scrimmage with three TDs the first two games.

California: WR Jeremiah Hunter had five catches for 66 yards last week against Notre Dame. Hunter has at least 65 yards receiving in each game this season and needs just five more catches to match his total of 21 from last season.

Arizona has won six straight in the series. ... Cal's last win over the Wildcats came in the 2009 season. ... Coach Jedd Fisch has two of his four career wins vs. the Bears, beating them as the interim coach at UCLA in 2017 and in his first season with Arizona in 2021. ... Wildcats WR Jacob Cowing has a catch in 35 consecutive games, tied for the second-longest active streak among FBS players. ... The Wildcats have forced six turnovers through three games, matching their total from 12 games last season. ... Cal's 24-17 loss at Notre Dame last week was its sixth one-score loss in the past two seasons. Bears QB Jack Plummer completed just 16 of 37 passes for 184 yards. ... Cal has won five straight home games, tied for its longest streak since a nine-game in 2008-09.

QB Jayden de Laura, along with RBs Michael Wiley and Jonah Coleman, all rushed for touchdowns on Saturday night against NDSU. Three rushing scores are the most for the Wildcats since punching in three on Nov. 2019 against Oregon State.