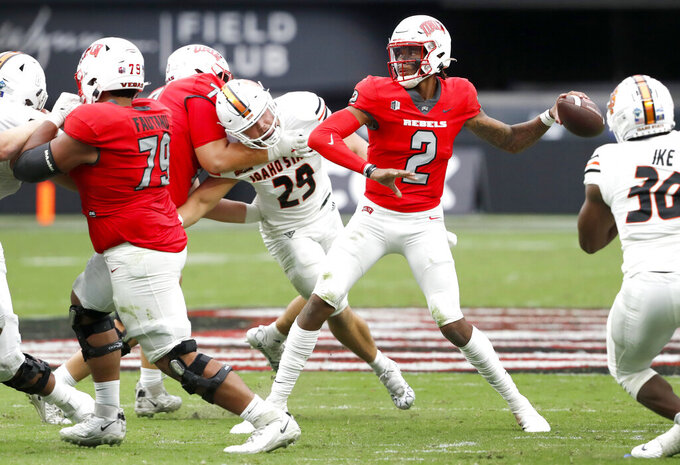 Line: California by 13 1/2, according to FanDuel Sportsbook.

The Rebels are seeking their first 2-0 start since 1999 and match their combined win total from the last two seasons. The Golden Bears look for their fourth 2-0 start in six seasons under coach Justin Wilcox as they try to bank some wins before the schedule gets tougher starting with a Week 3 trip to Notre Dame.

Cal secondary vs. UNLV WR Rickey White. The Bears' young cornerbacks will have their hands full with Michigan State transfer White and the Rebels. White had a strong debut, catching eight passes for 182 yards and two TDs in the opener, including a 72-yard score.

UNLV: QB Doug Brumfield completed 21 of 25 passes in the opener for a career-high 356 yards and four TDs. Brumfield's 84% completion rate ranks only behind Caleb Herring’s school-record 85.7% against Central Michigan in 2013.

California: RB Jaydn Ott ran for 104 yards to become the first player to top 100 yards on the ground in his Cal debut since Shane Vereen in 2008. He added 26 yards receiving and a TD catch. His 130 yards from scrimmage were the most by a player in his Cal debut since Keenan Allen had 158 yards against UC Davis in 2010.

The Rebels had a week off after beating Idaho State 52-21 in the opener Aug. 27. UNLV scored on all seven possessions in the opener. ... UNLV RB Aidan Robbins scored three TDs in his first game of the season. ... Rebels coach Marcus Arroyo was an assistant for the Bears in 2011-12. ... Cal has won four straight home games and is seeking its first five-game streak at home since 2015-16. ... Bears QB Jack Plummer went 23 for 35 for 268 yards and three TDs in his first game since transferring from Purdue. He completed passes to 11 receivers.