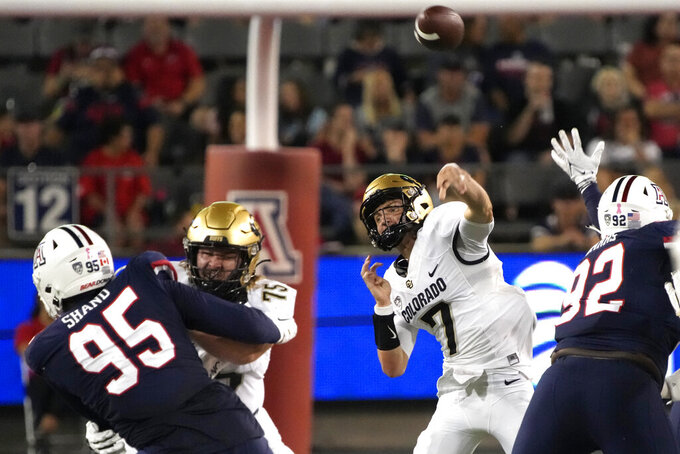 Line: California by 14 1/2, according to FanDuel Sportsbook.

Colorado interim coach Mike Sanford will try to turn things around after an 0-5 start led to the firing of Karl Dorrell. The Buffaloes are 0-5 for only the fourth time in their history. Cal's last win in Boulder was a 36-33 overtime victory in 2011.

California QB Jack Plummer and the offense have not turned the ball over in three games. The Bears are 13-6 under coach Justin Wilcox when they don’t commit a turnover. The Buffaloes have surrendered 216 points, the second-most among Power Five teams behind the 221 given up by Vanderbilt.

California: RB Jaydn Ott, who’s averaged 143.3 yards in the Bears’ three wins and 51 in their two losses. Ott is fourth in the Pac-12 with 533 yards rushing.

Colorado: True freshman Owen McCown is the third quarterback to start this season. The last time the Buffaloes had three starting QBs was in 2012.

The Bears are 1-9 in true road games since 2020. ... Cal averages 461.3 yards in three wins, 303.5 in two losses. ... Plummer has gone 135 straight passes since his last interception. The Cal record is 185 by Jared Goff in 2014. ... Sanford moved two staff members to assistant coach roles this week. Chris Reinert will serve as the special teams coordinator and Jeff Smart will work with Mark Smith to coach the linebackers. In addition, offensive line coach Kyle DeVan also is run-game coordinator now.