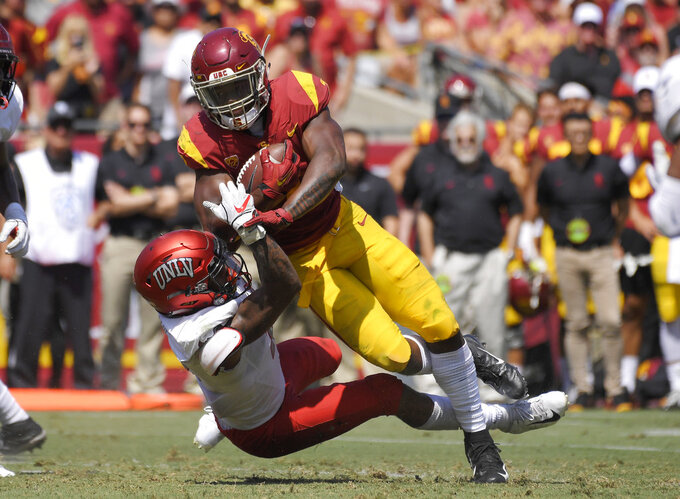 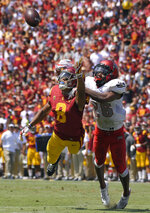 LOS ANGELES (AP) — JT Daniels, the second freshman to start at quarterback in a season opener for Southern California, threw for 282 yards with a 43-yard touchdown pass to Amon-Ra St. Brown to lead the No. 15 Trojans to a 43-21 victory over UNLV on Saturday.
Daniels was 22 of 35 passing for the Trojans (1-0), with fellow freshman St. Brown making seven receptions for 98 yards. The former Mater Dei High School teammates connected for their first college touchdown on the first play of the fourth quarter, with St. Brown getting a step behind cornerback Jericho Flowers on a post route to give USC a two-possession lead over the Rebels (0-1).
"Just as the game went on, I think I just continued to get a little more comfortable and a little more comfortable," Daniels said.
Aca'Cedric Ware rushed for 100 yards and a touchdown, and Vavae Malepeai scored the first of two touchdowns on a 2-yard run late in the second quarter that gave USC a lead it would not relinquish.
Chase McGrath, another Mater Dei product, kicked five field goals to tie a school record, and outside linebacker Porter Gustin had 1 1/2 sacks and recovered a fumble after undergoing knee surgery on Aug. 8.
UNLV used early big plays to hang with the defending Pac-12 champions for three quarters. Lexington Thomas gained 71 of his 138 yards rushing on a touchdown run after faking a reverse to put UNLV ahead 7-6 late in the first quarter.
Armani Rogers threw a 31-yard touchdown pass to Kendal Keys to go up 14-9 after UNLV extended the drive with a 36-yard run by Evan Austrie on a fake punt.
"Good game, good win, but we've got a lot to fix before we get to Stanford next week," USC head coach Clay Helton said.
Rogers was 12 of 27 for 97 yards and two touchdown passes, adding 82 yards rushing despite being sacked five times.
"I know — myself, our coaches, our kids — we're now getting on that bus riding home with genuine disappointment in the outcome of the game," UNLV coach Tony Sanchez said. "It does not feel good to play those guys tough for most of the night and walk away with the loss. We feel like we had opportunities to win that football game, and it's been a long time since we've had a team that could actually come out here and do that."
THE TAKEAWAY
UNLV: The Rebels can run the ball. UNLV finished with 308 yards on the ground, and looked like a team more than capable of making a bowl game for the first time since 2013.
USC: The Trojans need to tighten up on defense, and quickly. Bryce Love, the star running back for No. 13 Stanford, will like his chances to boost his Heisman Trophy candidacy next week against a USC defense that continued last season's penchant for allowing explosive gains.
POLL IMPLICATIONS
USC didn't do much to impress voters in the short term. However, Daniels' improvement over the course of the game bodes well for Helton in his third season, especially with road games against the Cardinal and Texas up next.
UP NEXT
UNLV: Hosts UTEP on Saturday.
USC: Opens Pac-12 play at Stanford on Saturday. The Trojans beat the Cardinal twice last season, including a 31-28 win in the conference title game.
___
More AP college football: https://apnews.com/tag/Collegefootball and https://twitter.com/AP_Top25