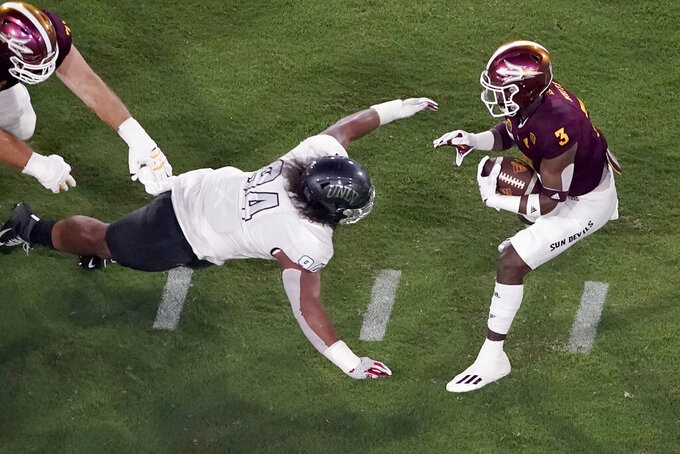 TEMPE, Ariz. (AP) — Arizona State's first half was a stinker and the second half was stellar.

In the aftermath of a surprisingly competitive 37-10 victory over UNLV on Saturday night, the 23rd-ranked Sun Devils chose to focus on the latter.

“Eventually, our guys came together,” Arizona State coach Herm Edwards said. “In the third quarter, that's when we got going.”

Quarterback Jayden Daniels ran for a career-high 122 yards and Rachaad White added two rushing touchdowns. Arizona State's defense held UNLV to just 19 total yards in the second half and the Sun Devils were dominant with a 23-0 advantage after the break.

White had 90 yards on the ground and scored a crucial 9-yard touchdown late in the third quarter to give Arizona State a 21-10 lead. He added a 1-yard touchdown run early in the fourth.

Daniels was 20 of 29 passing for 175 yards, two touchdowns and an interception. The second touchdown was a 33-yarder to LV Bunkley-Shelton that put the Sun Devils (2-0) up 34-10 and capped a stretch of three touchdowns in less than seven minutes, turning a tight game into a comfortable margin.

“I think we did a good job in the end,” Arizona State cornerback Chase Lucas said. “But we've just got to start fresher, start better.”

UNLV hadn't won a football game since 2019 and came into the game a 33.5-point underdog, according to FanDuel Sportsbook, but didn't look overmatched for a big chunk of the night. Arizona State had to work for its 14-10 halftime lead.

The Sun Devils quickly moved downfield on the first drive before Daniels’ pass into the end zone was intercepted by UNLV’s Nohl Williams. The Rebels (0-2) then put together an impressive 16-play, 70-yard drive that took nearly eight minutes.

UNLV settled for a 28-yard field goal from Daniel Gutierrez to take a 3-0 lead.

Edwards wasn't surprised it was a tight game for much of the night.

Daniels hit Johnny Wilson for a 3-yard touchdown pass to push Arizona State ahead 7-3 early in the second quarter, but UNLV followed with another good drive. This one ended when quarterback Jacob Brumfield scored a spectacular 4-yard touchdown, doing a somersault into the end zone after getting hit in the air right at the goal line. It gave UNLV a 10-7 lead

“We're not into moral victories, but I think we did a lot of things really well,” UNLV coach Marcus Arroyo said. “I think we've turned a page in regards to how our guys fight, our resiliency and how we see ourselves.”

Arizona State responded with a 13-yard touchdown run from Daniyel Ngata to take a 14-10 lead into the break.

Brumfield threw for 60 yards and ran for 43 yards and a touchdown. The Sun Devils ended the game with a 462-155 advantage in total yards.

Arizona State senior linebacker Darien Butler had two sacks against UNLV one week after he had two interceptions in a win over Southern Utah.

Butler was a big part of Arizona State's excellent defensive second half. UNLV had just one first down after the break.

UNLV: The Rebels still haven't won a football game since 2019, but are trending in the correct direction. One week after losing to FCS-level Eastern Washington 35-33, they went toe-to-toe with a veteran-filled Pac-12 opponent. UNLV's had a rough time the past couple years. They were 0-6 in the pandemic-shortened 2020 season and have started this year with two straight losses.

Arizona State: It was another uneven performance for the Sun Devils, who don't look like one of the Pac-12's elite at the moment. They eventually wore down an overmatched UNLV team, but it was a 14-10 game until late in the third quarter.

Arizona State won, but its spot in the Top 25 can't be secure after the up-and-down performance. The good news for the Sun Devils is they're one of just three Pac-12 teams — along with UCLA and Oregon — to start the year with a 2-0 record.