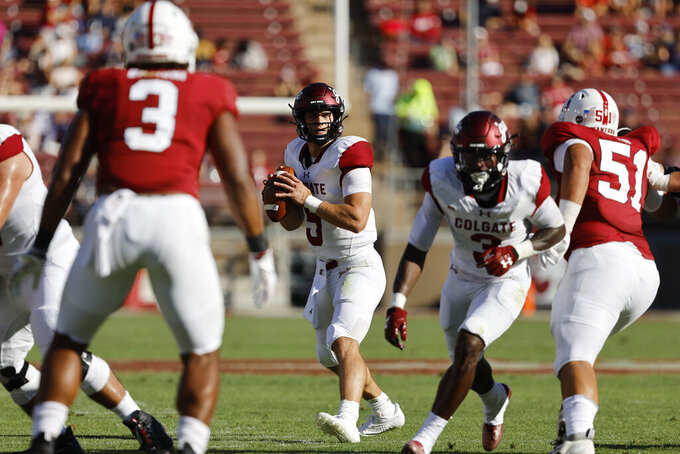 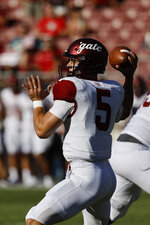 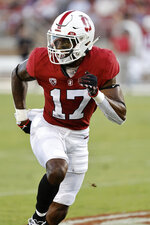 “All offseason, he's been the guy,” Stanford coach David Shaw said of his quarterback. “Leader on the football team. Voted a captain ... We have high expectations for him as well.”

E.J. Smith, the son of former Dallas Cowboys star Emmitt Smith, had career bests with 118 yards rushing and five catches while running for two touchdowns to help the Cardinal snap a seven-game losing streak that dated to last season.

“It's a great opportunity," Smith said of being named the starting running back. “There's been great running backs here in the past. Bryce, Christian and so forth. To be able to have that opportunity is a blessing.”

Stanford is 10-2 in home openers and 9-3 in season openers under Shaw. Colgate marked the second opponent and third game against a FCS team in Shaw’s 11-year tenure.

On Stanford’s first play from scrimmage, Smith cut left and raced into the end zone for an 87-yard touchdown. That tied Nathaniel Peat for the fifth-longest touchdown run in the program. Smith’s previous career high was 54 yards rushing against Utah last season. Smith added another 37 yards receiving.

“I said it on the headset, but that's how you start the season,” Shaw said. “We know that E.J. is strong and physical. He's got that finishing speed, too. Great way to start the season.”

McKee was 22 of 27 for 308 yards passing and was relieved for Ari Patu at the start of the fourth quarter, who threw a 7-yard touchdown to true freshman Mudia Reuben.

John Humphreys had 88 yards receiving for Stanford, highlighted by a 53-yard grab down the Cardinal sideline. Wilson finished with five catches for 82 yards.

After Stanford muffed a punt that led to a Colgate touchdown, the Cardinal answered with three consecutive touchdown drives to end the first half.

Casey Filkins scored a 1-yard touchdown in the opening minute of the fourth quarter, capping a 5-play, 77 yard drive to extend the lead to 35-10. Stanford finished with 497 yards of total offense.

The last time Stanford played a FCS opponent was UC Davis in 2018.

Shaw moved into 10th place in wins by a Pac-12 Conference head coach. He came into Saturday tied with Washington State’s O.E. Hollingbery and Oregon State’s Mike Riley with 93 wins. He’s a win away from tying Arizona’s Dick Tomey for ninth.

Stanford right guard Branson Bragg was out with an undisclosed injury and is questionable for Southern California next week. The senior started six games at right guard and three at right tackle last season.

Colgate: The Raiders couldn’t capitalize on four of Stanford’s turnovers and missed a pair of field goals in the first quarter. Spencer Biscoe scored Colgate’s lone points on offense with a 25-yard field goal in the third. Colgate is 0-9 against FBS opponents since beating Buffalo 38-15 in 2003.

Stanford: The Cardinal struggled on special teams early. Stanford fumbled three times and muffed a punt deep in its own territory on the first play of the second quarter, which led to a touchdown recovery by Asauni Allen. The Stanford defense forced a turnover and the offense, led by McKee, was sharp after the special team’s mishap.