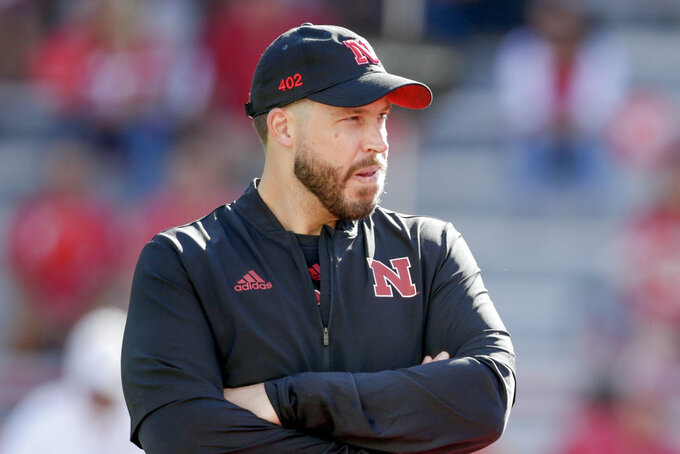 In this Sept. 15, 2018, photo, Nebraska defensive coordinator Erik Chinander follows warmups in Lincoln, Neb., before an NCAA college football game. Chinander was a Hawkeye through and through as a kid growing up in eastern Iowa and as a walk-on offensive lineman and graduate of Iowa. Now he's a Cornhusker, the defensive coordinator at Nebraska, and he assures everyone he is not conflicted going into the game Friday at Kinnick Stadium in Iowa City. His parents and other family and friends will be there, too, and they'll all be wearing red. (AP Photo/Nati Harnik) 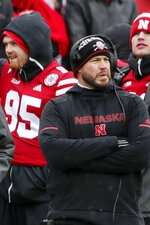 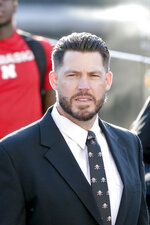 LINCOLN, Neb. (AP) — Erik Chinander was a Hawkeye through and through as a kid and then as a walk-on offensive lineman who earned two bachelor's degrees from Iowa.

He is the Nebraska defensive coordinator now, and as much as his eastern Iowa roots mean to him, he says he has no conflicted feelings heading into the Cornhuskers' final game at Kinnick Stadium in Iowa City on Friday.

"There's no doubt about it, I grew up in Iowa," Chinander said. "But home is where the heart is, and my home is in Lincoln, my heart is in Lincoln."

Chinander, 38, came with the rest of the Central Florida staff when Scott Frost was hired at Nebraska (4-7, 3-5 Big Ten) last December. Chinander and Frost have been together all but one year since they first worked together assistants at Northern Iowa a decade ago.

While Nebraska's spread-option offense has thrived with freshman quarterback Adrian Martinez, the defense has ranked near the bottom of the Big Ten in most statistics. The defense played its best game last Saturday when it held Michigan State under 300 yards in a 9-6 win, and Chinander said his charges will need to be at least as good against the Hawkeyes (7-4, 4-4).

"Obviously, it'll be good to go back to that stadium," Chinander said. "I got a lot of friends and family coming and wearing red to the game, so that'll be good. But this is an important game for our team. It's really important to finish strong and really important for the defense to play well this game and get some momentum going into the spring and recruiting."

Chinander has shared stories with linebacker Luke Gifford about his Iowa days, and Gifford said he senses this game is special to him.

"I know for us, as a defense, we want to go out there and play as well as we can, especially for him it would mean a lot," Gifford said.

Chinander is the son of longtime high school coach Gene Chinander, and Erik was a small-school all-state player at Allison-Bristow. He walked on at Iowa and made it onto the field for a handful of games as a backup offensive lineman. He lettered as a senior in 2002, when he also earned the Offensive Team Leader Award.

"I knew very early that I was much better at helping the other guys get lined up and do what they're supposed to do than actually doing it," Chinander said.

Chinander knew he wanted to go into coaching after finishing his degrees in history and health, leisure and sports studies. He spoke with coach Kirk Ferentz and other Iowa staff members about becoming a graduate assistant.

"Those guys all said we'd love to have you when there's an opening, but you probably need to get out and spread your wings and see some other stuff and we'll help you as much as we can," Chinander said. "And they helped me get some opportunities down the road that I got. The advice they gave me to spread my wings has been really good, and we haven't turned back and I'm glad where I'm at."

Chinander was an assistant at Ellsworth (Iowa) Community College in 2003 and coached the tight ends at Northern Iowa from 2004-09. Frost was on the UNI staff in 2007-08 before heading to Oregon.

Chinander was an Oregon intern in 2010 and graduate assistant in 2011-12 and left for a year to work with the Philadelphia Eagles' defensive line. He was back at Oregon as an assistant in 2014 and has been with Frost since.

Naturally, the two liked to reminisce about their college days — Frost at Nebraska and Chinander at Iowa.

"Now he's finally on the good side," Frost said.