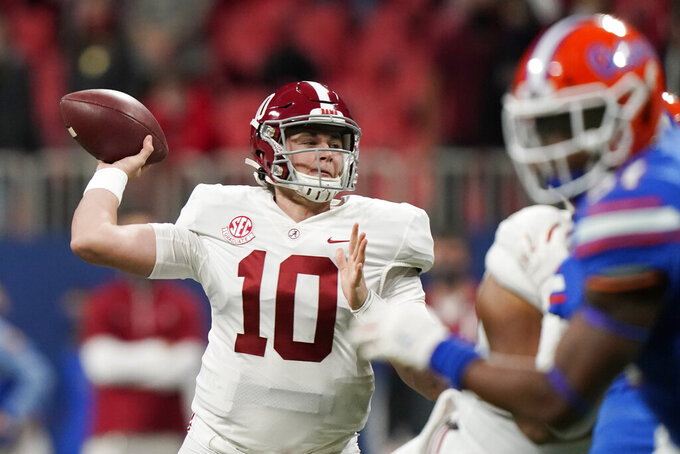 Alabama’s best offensive player might be quarterback Mac Jones, who while is efficient produces big plays. Or it could easily be DeVonta Smith, who has been college football’s most prolific wide receiver.

Don’t count out tailback Najee Harris, a scoring machine who’s dangerous as a runner and a receiver.

The top-ranked Crimson Tide doesn’t have to choose who’s the best. The onus is on opponents — and next up is No. 4 Notre Dame in Arlington, Texas Friday in the College Football Playoff semifinals.

The Fighting Irish are well aware of the challenge they face defending Alabama's dynamic playmakers, who among the very best at their position in college football.

“I mean, it’s the balance of Najee and his ability to run and catch the football coming out of the backfield,” Notre Dame coach Brian Kelly said Monday. “And then Smith and (fellow receiver John) Metchie. Smith is just that good of a player that you know playing 1-on-1 against him is very difficult.

“So, when you’re doubling him, you’re losing one in the box and now you’re putting Harris in a very favorable situation with a very good offensive line. So not a lot of good answers there.”

The game was scheduled to be played at the Rose Bowl in Pasadena, California, but was relocated to the Dallas Cowboys’ stadium in a move prompted by California’s ban on spectators at sporting events during the pandemic.

But no matter the venue, the Alabama trio has not disappointed this season.

Jones and Smith are among the four finalists for the Heisman Trophy, along with Clemson quarterback Trevor Lawrence and Florida quarterback Kyle Trask. Harris finished fifth in the voting after a huge performance in the Southeastern Conference championship game.

Alabama is the second team to have three top-5 Heisman finishers, joining Army in 1946 with running backs Glenn Davis (who won) and Doc Blanchard (fourth) and quarterback Arnold Tucker (fifth).

Tide cornerback Patrick Surtain II is glad he doesn’t have to choose between his two finalist teammates.

“I believe they both deserve it. Their work ethic is unbelievable,” said Surtain, the Southeastern Conference defensive player of the year.

“They both deserve everything they’ve been nominated for.”

Add in Harris, and they’re finalists for four national awards collectively. Smith and Jones join Clemson’s Lawrence as finalists for the Maxwell Award given to the nation’s top player. Smith is one of three Biletnikoff Awards finalists as the top receiver.

Jones is a finalist for the Davey O’Brien Award for the nation’s best quarterback and Harris remains up for the Doak Walker Award as the top running back.

Smith and Harris opted to return for their senior seasons, and have been better than ever.

All three have put up huge numbers.

— It would be hard not to get overshadowed at times by Smith and Jones, but Harris has been a scoring machine. Harris leads the nation with 24 rushing touchdowns and his 1,262 yards ranks third. He is already the Alabama career record holder for rushing yards (3,639) and touchdowns (44) and total touchdowns (54).

Harris has accounted for multiple touchdowns eight times this season, scoring three times on catches against Florida in the SEC title game and twice more on rushes. Afterward he deferred to Jones and Smith in the Heisman talk, but scoffed at any surprise at his receiving abilities.

“I’ve been catching the ball since I was in the fetus," Harris said. That includes his days as a teammate of Notre Dame quarterback Ian Book in a 7-on-7 tournament.

“He was by far the best player I’ve played with at that time,” Book said. “There’s no doubt. And he is still one of them for sure. He’s an unbelievable player. Really good person.”

— Jones has been described as game manager, and he certainly does that well. But he has also proven more than capable of hitting his talented receivers with the deep ball. Jones leads the nation in efficiency rating (202.35) and completion percentage (76.5) while also ranking second with 32 touchdowns and third at 340 yards per game.

Jones had three straight 400-yard games early in the season and added a fourth against Florida (418 yards, five touchdowns). That's more than any other 'Bama quarterback has produced in his career.

“He’s the leader of the offense," Smith said. "He controls everything.”

— Smith is producing arguably the best season of any Alabama receiver, including all those recent NFL first-rounders from Julio Jones to Henry Ruggs III and Jerry Jeudy. He's leading the nation with 98 catches and 1,511 yards and ranks second with 17 touchdowns.

Smith is trying to become the first wide receiver to win the Heisman since Michigan's Desmond Howard in 1991. The only other receiver to win was Notre Dame's Tim Brown in 1987.

Alabama's Amari Cooper finished third in 2014. Smith could best that.

“He’s the most electric player in college football,” Jones said of Smith. “He means the most to us here at Alabama football.”