Freeman aims for national title as he takes over No. 5 Irish 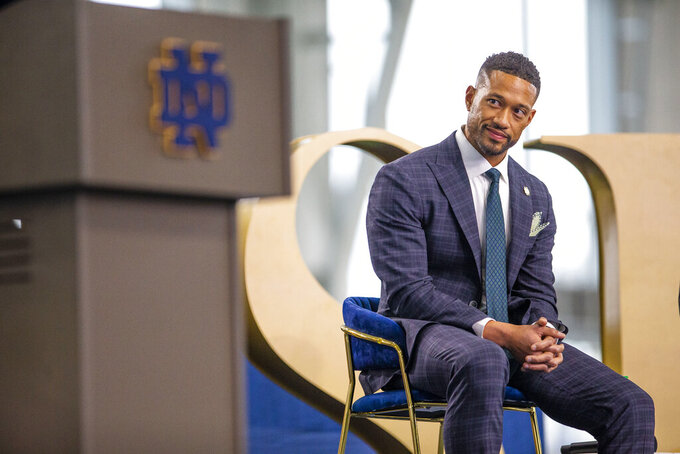 “I’m ready to lead this program to the greatest heights,” said the 35-year-old Freeman, never a head coach but an assistant at five schools, including the last 11 months as Notre Dame’s defensive coordinator under former coach Brian Kelly.

Those heights, Freeman hopes, include the school’s 12th national championship and first since 1988. Lou Holtz’s Fighting Irish won that on Jan. 2, 1989 in the Fiesta Bowl against West Virginia when Freeman, a future standout linebacker at Ohio State, was just days from turning three years old.

The No. 5 Irish, who finished fifth to just miss out of this year’s four-team College Football Playoff, won't have a shot this year but instead will take their 11-1 record to the Fiesta Bowl on Jan. 1 to play No. 9 Oklahoma State (11-2)

Freeman thanked the crowd of more than 400 in the Irish Athletic Facility that included university president Rev. John Jenkins, athletic director Jack Swarbrick, his father and mother and wife Joanna and their six children, and Notre Dame’s marching band and cheerleaders.

But Freeman reserved his biggest kudos for the more than 100 players in attendance who were stunned when Kelly, the school’s winningest coach, left Notre Dame last Monday night to accept a 10-year, $95-million base contract to coach Louisiana State.

“You’re exceptional thinkers,” Freeman said. “You never look for the easy path. Most of you never take shortcuts. You’re tireless workers, and you’re committed to excellence in everything you do.”

Junior running back Kyren Williams said Notre Dame was expanding its horizons with the hiring of Freeman, the second Black head coach in the school’s history.

“For a person of color like myself, it means everything,” Williams said. “We have a lot of diversity (on the team) and we’re moving forward at this university … being able to accept more and different.”

Williams was one of seven team captains who met with Swarbrick last Tuesday afternoon after Kelly delivered a four-minute talk to the stunned team at 7 a.m. that day before driving away from campus and flying to Baton Rouge. Williams and the other six – nose tackle Kurt Hinish, linebacker Drew White, center Jarrett Patterson, wide receiver Avery Davis, defensive end Myron Tagovailoa-Amosa and safety Kyle Hamilton – indicated to Swarbrick what they were looking for in a new coach.

“What they insisted I understand was that they had built the best culture in college football,” Swarbrick said. “They also wanted me to know that they owned that culture. They built it. It was theirs. And their message, stated clearly and convincingly, was Jack, don’t screw this up.

“The perspective that those seven captains offered to me put a heavy finger on the scale in favor of coach Freeman,” Swarbrick continued. “They and I believe so strongly that Marcus is the perfect guardian of the very special culture you, the student-athletes, have built.”

Father Jenkins, who was in Rome last week, met on Zoom with Freeman and was convinced as well. “Marcus Freeman is clearly someone who influences young people by showing he cares about them, winning their trust, inspiring them and challenging them to do great things,” Jenkins said.

“I think he (Swarbrick) was floored by our conviction,” White said. “We told him the next guy was already in the building and was ready for the job. He (Freeman) has a contagious energy to him. He brings young men together.”

“It was in this team’s best interest,” Hinish said. “We felt that way from top to bottom. It’s nice to see the results that we wanted. He (Freeman) cares for you more as a person than he does as a player.”

The players later met with Freeman to map out the rest of the semester which includes final exams and then preparations for their meeting with the Cowboys.