Gophers will send deep backfield at SDSU in opener 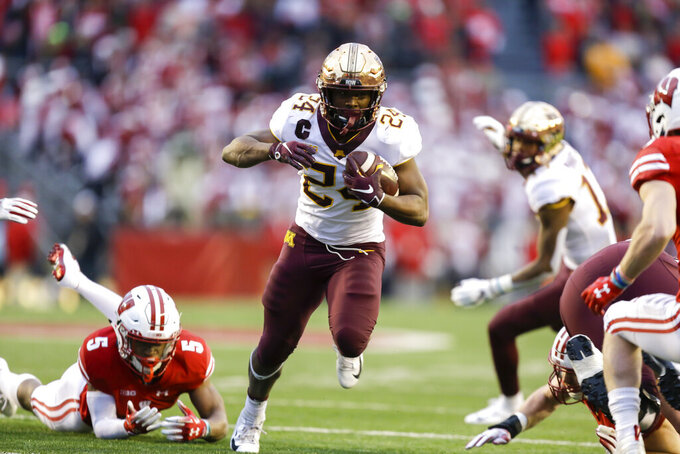 FILE - In this Nov. 24, 2018, file photo, Minnesota running back Mohamed Ibrahim (24) runs past Wisconsin cornerback Rachad Wildgoose (5) during the first half of an NCAA college football game, in Madison, Wis. Minnesota takes a stacked offense and increased confidence into the third season under coach P.J. Fleck, but the Gophers better be prepared for their opener against neighbor South Dakota State, which is ranked fourth in the FCS poll. (AP Photo/Andy Manis, File)

MINNEAPOLIS (AP) — When Rodney Smith went down with a season-ending knee injury in the second game of 2018, Minnesota turned to Mohamed Ibrahim as the lead ball carrier and enjoyed a seamless senior-to-freshman handoff of the backfield baton.

This year, those two will probably be passing it back and forth a lot more.

Smith, granted a medical redshirt, has returned with his 2,959 career rushing yards for a sixth season. Ibrahim, the second-leading freshman rusher in college football last year, has gladly made room for a widely respected player who became a mentor and unofficial coach while rehabbing last season.

"I'd say we are the tightest-knit group on the team. I'm sure everybody says that, but we truly have a bond that, off of the football field, you can see," Smith said. "We're there for each other off of the field when things go on. Injuries, we're all there. Surgeries, we all show up. Just to make sure that we're all taken care of."

When the Gophers take on South Dakota State in the opener Thursday night, they will surely send a steady stream of carries by both Smith and Ibrahim at the Jackrabbits in an attempt to establish their strength.

Another sophomore, Bryce Williams, had 502 yards and four touchdowns for Minnesota in 2018. Coach P.J. Fleck said he'll also look to play true freshmen Treyson Potts and Cam Wiley against South Dakota State. Not to be left out of the mix for 2019 is fifth-year senior Shannon Brooks, whose knee injuries have set him back the last two seasons and was still in rehab mode when fall camp began.

"We need to have running backs in the Big Ten. If you ask any head football coach and say, 'I'll give you five to six running backs that can play,' I don't think there's anyone who would turn that down. As physical of a conference we're in, especially the teams that run the ball as much as we run the ball, you want to have depth," Fleck said.

The quartet of Smith, Brooks, Ibrahim and Williams has already logged a total of 1,328 carries, 6,503 yards, 52 touchdowns and 12 seasons over their careers. They'll likely all share the load in some undetermined way over the course of this fall.

"What we've described to them is, 'Guys, that means you're healthier. That means as a team, we're going to be better,'" Fleck said.

Border-state FCS schools have been challenging matchups for Minnesota. The practical driving distance to the game and excitement of playing at a Big Ten venue always lures thousands of fans of the opposition, and the 215-mile trip from Brookings, South Dakota, will be sure to bring plenty of supporters.

This year, the Jackrabbits are ranked third and fourth, respectively, in the two major preseason FCS polls.

"It's not something where we're going to walk into their stadium and be in awe of things," said Stiegelmeier, who has begun his 23rd year on the job.

Like many of their FBS peers, the Gophers have seen an attendance decline over the last decade, despite their move back to campus to open TCF Bank Stadium in 2009. The athletic department has begun several new initiatives to try to fill the buildings in the revenue-producing sports, and a 24-hour promotion of $10 tickets last week for the South Dakota State game resulted in 7,127 seats sold.

The Jackrabbits replaced Taryn Christion, the program's all-time leading passer who's in training camp with the Dallas Cowboys, with redshirt freshman J'Bore Gibbs. They also have a new offensive coordinator, Jason Eck. The Gophers aren't exactly sure what to expect for plays and formations.

"You're scheming for ghosts," Fleck said.

The Gophers have won 15 straight nonconference games and 19 of their last 20 nonconference home games, with the only loss on Sept. 3, 2015, a 23-17 decision against second-ranked TCU.