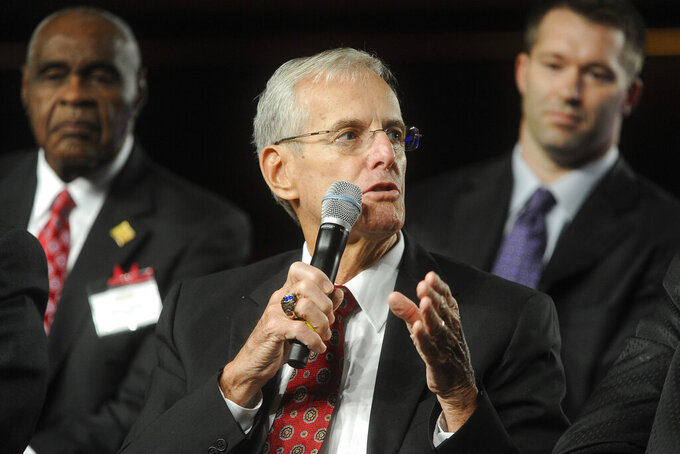 INDIANA, Pa. (AP) — Frank Cignetti, who carved out a Hall of Fame career spending a lifetime in coaching, including 20 years turning his alma mater Indiana (Pa.) into a Division II power, has died. He was 84.

IUP, where Cignetti coached from 1986-2005, announced Cignetti's passing Saturday. There was no immediate word on the cause of death.

Cignetti's son Curt Cignetti, currently the head coach at James Madison, wrote in a post on his verified Twitter account on Saturday “I was blessed to have a great Dad! He inspired me and so many others. Love you Dad! Rest in peace.”

The elder Cignetti spent four years as the head coach at West Virginia in the 1970s but found his greatest success when he returned to IUP, located about an hour east of Pittsburgh. He took a job as the school's athletic director in 1982 before becoming head coach in 1986.

Cignetti went 182-50-1 in 20 years with the Crimson Hawks. IUP reached the national semifinals six times during his tenure, playing in the Division II championship game in 1990 and 1993. He retired after the 2005 season as the third-winningest coach in Division II history and was inducted into the College Football Hall of Fame in 2013.

Cignetti is survived by his wife Marlene and their four children, including Frank Cignetti Jr., the current offensive coordinator at Pittsburgh. The younger Cignetti called his father his hero and was at work hours after his father's passing on Saturday as the Panthers hosted Tennessee.

The elder Cignetti starred at IUP as a wide receiver in the late 1950s before going into coaching after graduation. He quickly climbed the ranks and earned a job on Bobby Bowden's staff at West Virginia in 1970. He replaced Bowden in 1976 and went 17-27 in four years with the Mountaineers before being let go after going 5-7 in 1979.

Cignetti's final year at West Virginia was marked by a battle with cancer, a fight he won though it wasn't enough for him to keep his job. He took a brief sabbatical from coaching before returning to the game that defined his life.

He led IUP to the Division II playoffs in his second season with the Crimson Hawks in 1987. IUP made the postseason 12 more times during Cignetti's highly successful run.

"When is the right time (to walk away) in this business?” Cignetti told the Pittsburgh Tribune-Review after his final game at IUP in 2005. “You always think you’ll have that one more great season.”

Cignetti was born in Apollo, Pennsylvania in 1937.