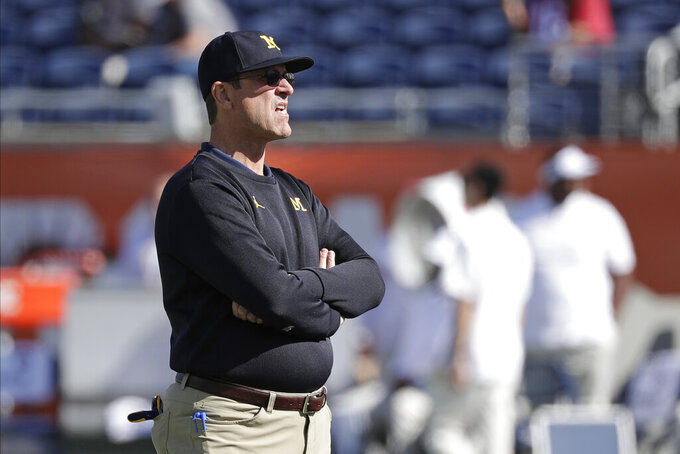 FILE - Michigan head coach Jim Harbaugh watches players warm up before the Citrus Bowl NCAA college football game against Alabama in Orlando, Fla., in this Wednesday, Jan. 1, 2020, file photo. Michigan's Jim Harbaugh and Nebraska's Scott Frost have fallen short of expectations coaching their alma maters. The ninth-ranked Wolverines head to Nebraska this week, and the timing is perfect because both teams are coming off big wins. The vibes are positive around both teams now. They won't be next week for the one that loses. (AP Photo/John Raoux, File)

LINCOLN, Neb. (AP) — It seems that negativity has swirled around Michigan's Jim Harbaugh and Nebraska's Scott Frost since they returned to coach at the schools where they enjoyed so much success as players.

The vibe is decidedly upbeat around both teams this week, just in time for Saturday night's meeting of teams in the top five for all-time wins.

Michigan is 5-0, ranked No. 9 and coming off a convincing victory against Wisconsin.

Nebraska is 3-3, believes it could be 5-1 had it not been for special teams meltdowns, and fresh off a 49-point win over Northwestern that was the Cornhuskers' most lopsided in a Big Ten game since they joined the conference 10 years ago.

Harbaugh and Frost both were seen as saviors for their respective programs, both were given long contracts and both have yet to deliver on the high expectations set for them.

“I can see all the potential storylines there for sure,” Nebraska quarterback Adrian Martinez said. “Former quarterbacks. Guys who played in the NFL. Alma maters. Respected in their industry. It’s a big game for both of us. I know they’re trying to continue to build momentum and so are we.”

Harbaugh, 57, was Michigan's quarterback in the mid-1980s. He famously made good on his guarantee to beat Ohio State in 1986, and he finished third in Heisman Trophy voting that year. He had a long NFL career and had success at two college stops before he coached the San Francisco 49ers to a Super Bowl.

Frost, 46, was Nebraska's quarterback in the mid-1990s and led the Huskers to a share of the ‘97 national title (with Michigan) after famously lobbying for votes during his post-Orange Bowl TV interview. He spent four-plus years as a backup safety in the NFL.

He was a rising star as an Oregon assistant and orchestrated Central Florida's quick turnaround in his first head coaching job before he returned to his home state.

“You want to win everywhere. You probably take it a little more personal one way or the other at home,” Frost said Monday. “There’s nowhere where I would probably despise losing more than here. It’s harder to handle here. But also, I don’t know if I’ve ever enjoyed wins as much somewhere else as I do here.”

Harbaugh and the Wolverines hammered Nebraska 56-10 in 2018 in the Huskers' third game under Frost. It was part of a 10-game Michigan win streak that ended with a 62-39 loss to Ohio State.

And there's the rub. Harbaugh is 54-22 in his seven seasons, and his team usually wins the games it should — yet hardly ever the ones it shouldn't. Harbaugh is 0-5 against Ohio State, 2-12 against top-10 teams, 2-8 against ranked teams on the road and 1-4 in bowls.

The 38-17 win over Wisconsin last week gave Harbaugh his first win in 13 tries as an underdog and it ended a 20-year drought against the Badgers on the road. The game brought relief and joy.

Michigan’s players had so much fun when “Jump Around” blared after the third quarter at Camp Randall Stadium that they danced on the sideline as enthusiastically as the students in the stands.

“It was au naturale,” Harbaugh said. “It just happened. We had talked about it early in the week: `When you go on the road you want to embrace that environment, make their crowd cheer like it’s your crowd cheering, make their music your music.′ We played that song quite a bit during the week as crowd noise. I think they just made it theirs in that moment.”

The fact remains, though, that Michigan has finished higher than third in the Big Ten East only once in six previous seasons under Harbaugh. The Wolverines are confident, though. They haven't trailed and have not turned over the ball through five games.

“Our expectation is to win a championship — Big Ten and national championship,” fifth-year senior and captain Joss Ross said.

Championship expectations would be premature for Nebraska. The Huskers are still a week-to-week proposition, and the fan base had hoped Frost would be further along by now.

He returned to Lincoln in December 2017 with an air of bravado following UCF's incredible run. He was national coach of the year, and he said at his introductory news conference that he hoped the Big Ten would have to adjust to him and his up-tempo offense rather than the other way around.

Frost is 15-23 at Nebraska, including 10-19 against Big Ten opponents. His teams have been undisciplined on the field, taking bad penalties, and special teams have been horrid.

He's 0-9 against ranked teams and has yet to win more than five games in a season. He’s 0-3 against rival Iowa and a combined 3-4 against Big Ten West weaklings Purdue and Illinois.

A month ago, following a terrible loss at Illinois, fans and media wondered if this team could win three games. The 56-7 beatdown of Northwestern has revived talk of going to a bowl.

“I think they see the formula now,” Frost said of his players. “They prepared really well for several weeks in a row. Had one go our way Saturday in a big way. No reason to change anything.”