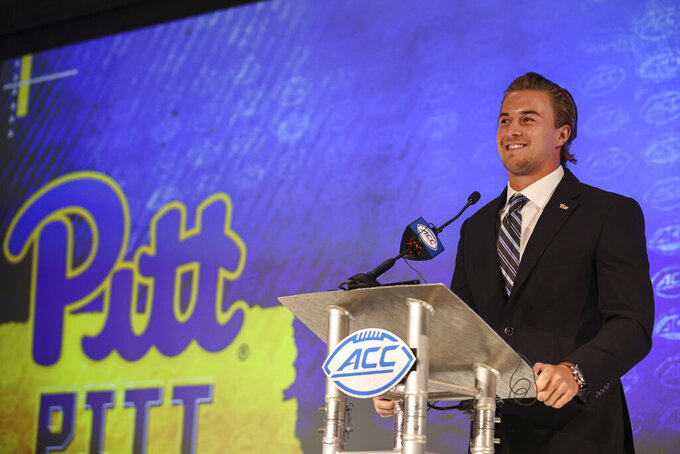 CHARLOTTE, N.C. (AP) — North Carolina linebacker Jeremiah Gemmel wants to make every possible stop. He also knows it’s not that easy when working out against Heisman Trophy candidate Sam Howell, and he makes sure to pull aside frustrated defensive teammates to tell them so.

“Not every quarterback in the ACC can throw like that,” Gemmel said he tells them.

Besides Howell, Miami star D’Eriq King is back for a sixth college season after suffering a serious knee injury in last year’s bowl game. Louisville’s Malik Cunningham rankedin the top 25 in the Bowl Subdivision in passing efficiency, while Pittsburgh’s Kenny Pickett, Boston College’s Phil Jurkovec and Wake Forest’s Sam Hartman all ranked among the top 30 in the FBS for passing yardage per game.

“There’s no question about it, quarterbacks are going to be ahead in the ballgame,” Pitt coach Pat Narduzzi said Wednesday during ACC footall media days. "I just know where Kenny was and where Kenny’s going to be. I see a better football player, and it’s going to be the same case for everybody.”

At the minimum, it sets the stage for the ACC to have a fast start offensively and make life difficult for defenses against quarterbacks who have seen plenty of reps, coverages and schemes.

Narduzzi, a former defensive coordinator, noted at least one positive for defensive coaches in facing the challenge of slowing those quarterbacks: At least there is plenty of tape available to study compared to having a league full of unknown new starters.

"The depth at the position — unbelieveable,” said ACC Network analyst Eric Mac Lain, an offensive lineman on Clemson’s national runner-up team in 2015. “I think it’s the best in the country. … the level of execution from Week 1 should be extremely high. So it’s going to be fun to watch that.”

Howell headlines the ACC class after powering the Tar Heels’ high-scoring attack for two seasons. He has started 25 games and has been the perfect fit in Phil Longo’s scheme in pushing the ball downfield yet avoiding major mistakes, throwing just 14 interceptions in 770 attempts (1.8%).

Coach Mack Brown has already indicated this will likely be the quarterback’s final season before pursuing an NFL career. And Howell will face huge expectations despite losing two 1,000-yard rushers and a 1,000-yard receiver to the NFL.

All that experience has also revealed areas of improvement among several quarterbacks. For King, it was getting better at hitting downfield throws. For Pickett, it was improving his pocket awareness. And for Georgia Tech's Jeff Sims, it was honing his throwing mechanics to sharpen his accuracy.

The outlier of the league is Duke after Clemson graduate transfer Chase Brice left for Appalachian State after one season. That opens an opportunity for graduate quarterback Gunnar Holmberg, who appeared in seven games in 2018 and 2020 after missing the 2019 season due to a knee injury.

Holmberg is hoping his experience studying the offense and taking practice reps has him ready to follow the lead of former Blue Devils veterans like Anthony Boone, Thomas Sirk and Quentin Harris — all of whom waited their turn for multiple seasons before taking over the offense under coach David Cutcliffe.

“There's a path that's been paved before me that I've seen with Coach Cut, in just the way those guys walk out and look like they have total understanding and really have the game in their hands," Holmberg said. "I think it's something that I look forward to proving myself.”