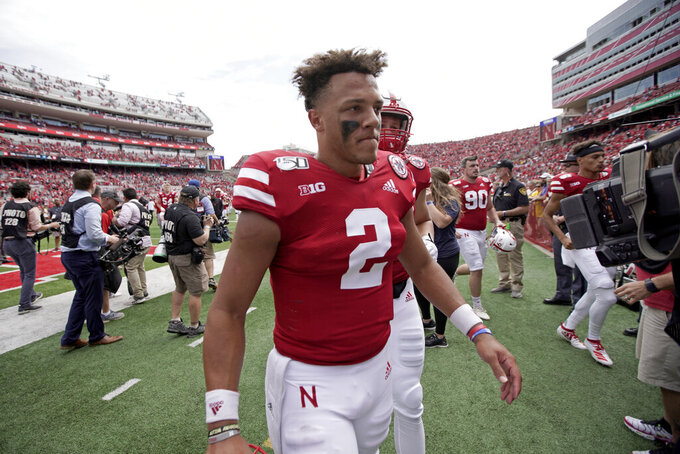 FILE - In this Aug. 31, 2019, file photo, Nebraska quarterback Adrian Martinez (2) walks off the field following a 35-21 win against against South Alabama in an NCAA college football game in Lincoln, Neb. The co-No. 25 Cornhuskers are revved up to play their old Big Eight/Big 12 rivals after a sluggish offensive performance against South Alabama. Martinez must be much better if Nebraska is going to win a road game for the first time under second-year coach Scott Frost. (AP Photo/Nati Harnik, File)

The Cornhuskers are revved to play their old Big Eight/Big 12 rivals after a sluggish offensive performance against South Alabama. Colorado came into Lincoln last year and rallied in the second half to win; plus the Buffaloes knocked out QB Adrian Martinez on what the Huskers allege was a dirty play. Martinez must be better than he was last week if Nebraska is going to win a road game for the first time under second-year coach Scott Frost. The defense, which saved the Huskers last week, takes a big step up in competition. Last year, Colorado QB Steven Montez passed for 351 yards and Laviska Shenault Jr. had 10 catches for 177 yards.

No. 21 Syracuse at Maryland

So Maryland beat Howard 79-0 in Mike Locksley's first game as head coach (he was interim coach for six games in 2015). Now let's see how the Terrapins stack up against a ranked opponent. Despite the competition he was going against last week, it was obvious Maryland upgraded its QB situation with Virginia Tech graduate transfer Josh Jackson. Anthony McFarland Jr., a 1,000-yard rusher as a freshman last year, probably will play an expanded role this week. Syracuse, which shut out Liberty on the road, wants to see more from its offense in the leadup to a home game against top-ranked Clemson.

Coach Chris Ash of Rutgers (at No. 20 Iowa) grew up in Ottumwa, Iowa, about 65 miles from Kinnick Stadium. ... Michigan State (vs. Western Michigan) leads the nation in rushing defense after holding Tulsa to minus-73 yards on the ground, a record low for a Spartan opponent. ... No. 7 Michigan is playing Army for the first time since 1962. ... Purdue (vs. Vanderbilt) is looking to score against the Commodores for the first time after getting shut out in the previous two meetings, both in the 1940s. ... Minnesota (at Fresno State) had a drive lasting 10 minutes, 5 seconds against South Dakota State, its longest since a 10:07 possession against Northwestern in 2004. ... No. 15 Penn State (vs. Buffalo) will honor its undefeated 1994 Big Ten and Rose Bowl champion team at halftime... Michael Panix of Indiana (vs. Eastern Illinois) had 393 yards of total offense against Ball State, the most in a Hoosier freshman debut since Antwaan Randle El posted 467 against Western Illinois in 1998. ... Illinois (at UConn) will try to end a seven-game nonconference road losing streak dating to 2008. ... No. 17 Wisconsin (vs. Central Michigan) is going for its 24th straight win in a home opener.

Cincinnati has lost 11 straight in the series since beating the Buckeyes in 1896 and '97. Ohio State can't sleep on this one. Third-year Cincinnati coach Luke Fickell returns to Columbus, where he was born, played for the Buckeyes and was a longtime assistant and filled in as head coach in 2011. The Bearcats are picked second to Central Florida in the AAC East and beat UCLA 24-14 in their opener in a game not as close as the final score. Justin Fields and the Ohio State offense were unstoppable their first four series against Florida Atlantic. Cincy's defense provides a tougher test.

Sargent could be in line for a big day against Rutgers, which gave up 183 rushing yards to a UMass team that had one of the worst ground attacks in 2018. Sargent averaged 6.5 yards per carry and finished with 91 yards against Miami (Ohio) and also caught four balls for 65 yards.