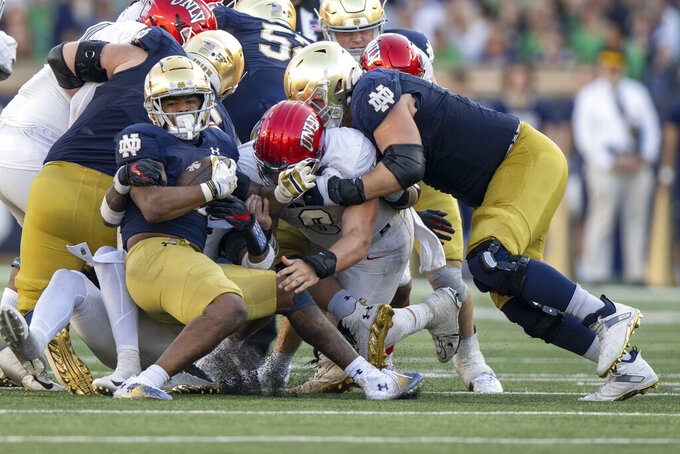 Notre Dame running back Logan Diggs (3) pushes against the pile during the second half of an NCAA college football game against UNLV, Saturday, Oct. 22, 2022, in South Bend, Ind. (AP Photo/Marc Lebryk)

SOUTH BEND, Ind. (AP) — Coach Marcus Freeman is about to find out what kind of team Notre Dame really is.

There are three ranked opponents left on the schedule, including each of the next two Saturdays. And if the Fighting Irish want to finish strong, Freeman knows he'll need one of the nation's top defenses to bring its best when it matters most — in the red zone.

“If we don’t execute and we don’t play well, we’re not going to win,” he said. “That’s the reality of where we’re at with the opponents we have coming up. If we play well, we have the ability to beat anybody. I firmly believe that.”

So far, it's been a rocky first season for Freeman. But one constant has been the defense.

It played well when Notre Dame (4-3) handed No. 21 North Carolina its only loss, 45-32, and held No. 2 Ohio State 28 points below its season average in the opener. But a struggling offense led to inexplicable home losses against Marshall and Stanford.

And since quarterback Drew Pyne replaced the injured Tyler Buchner in September, the inconsistency has only continued.

That's put pressure on the defense to play at an elite level, and in many ways it has.

“We’re playing two really good opponents, and it’s going to be a measuring stick for how good this team is," Freeman said.

Notre Dame closes the regular season at No. 10 Southern California.

A strong pass rush is the strength of the Irish defense. Notre Dame averages 2.9 sacks per game, which ranks 23rd nationally, and has allowed the 14th-fewest passing plays of at least 20 yards.

Defensive end Isaiah Foskey leads the team with six sacks, though none have come against a Top 25 foe. The Irish need the preseason All-American to have a bigger impact over the season's final month.

“We’re going to need him this week,” defensive coordinator Al Golden said. “The edge is tested consistently by Syracuse, whether it’s the pass game, the perimeter screens, the read series, the option series or the counter series.”

Irish opponents have scored on every trip inside the red zone this season, including touchdowns 82.4% of the time, ranking 130th out of 131 FBS teams. It's a major step back from last season when Freeman's defense allowed TDs on 38.3% of red-zone trips.

Notre Dame allowed UNLV to convert on fourth down twice in the red zone. Both resulted in touchdowns.

That part has frustrated Freeman.

So has the lack of takeaways. A year ago, Notre Dame had 25. This year, the Irish have four, with just one interception.

The flip side is the Irish have excelled between the 20s. They've given up 17 red-zone trips, 14th-fewest nationally.

But it won’t be easy over the next two weeks. Syracuse and Clemson convert more than 93% of their red-zone trips into points.

“It’s not like we’re giving up 35 points a game,” Golden said. “We’re doing a good job of keeping guys out of the (red zone), but we must do a better job when we’re in there, no doubt.”

By John Zenor 15 minutes ago
By Pete Iacobelli 2 hrs ago
2 hrs ago
By Ralph D. Russo 6 hrs ago
By Ken Powtak 19 hrs ago