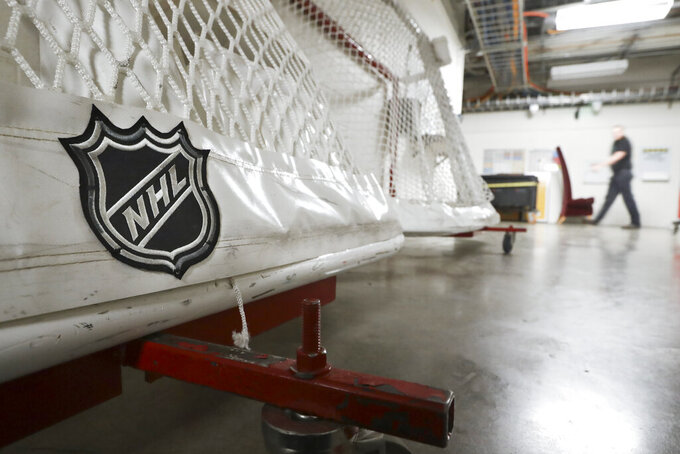 FILE - In this March 12, 2020, file photo, goals used by the NHL hockey club Nashville Predators are stored in a hallway in Bridgestone Arena in Nashville, Tenn. The National Hockey League and players reached a tentative deal Friday, Dec. 18, 2020, to hold a 56-game season in 2021, pending the approval of each side's executive board and Canadian health officials. (AP Photo/Mark Humphrey, File)

Pepperdine’s men’s basketball team is halting activities because of a positive COVID-19 test on Wednesday.

As a result, the Waves will postpone West Coast Conference games against BYU at home on Thursday and at Saint Mary’s on Saturday.

Pepperdine will try to reschedule the games.

The team’s Sun Belt Conference opening games with Coastal Carolina, which had been scheduled for Friday and Saturday, have been postponed. No decisions have been made about rescheduling the games.

Team activities will be paused for at least seven days while those affected will remain in isolation.

The Kansas State women’s basketball program has paused all team activities following a spike in COVID-19 positives, causing its games against Oklahoma on Saturday and West Virginia on Tuesday to be postponed.

The Wildcats have not played since Dec. 21, when they lost a close game to No. 20 Texas. The earliest they would play again would be against seventh-ranked Baylor on Jan. 10, giving them 20 days between games.

The Big 12 intends to reschedule the games against the Sooners and Mountaineers.

The team announced Wednesday that Elliott, who is also the running backs coach, would not travel with the team to New Orleans and would be unavailable when the second-ranked Tigers (10-1; No. 2 CFP) face No. 3 Ohio State (6-0; No. 3 CFP) on Friday in a College Football Playoff semifinal. It did not say if he had tested positive for the coronavirus.

There was no immediate word on whether one person such as quarterbacks coach Brandon Streeter or a group of offensive assistants would collaborate on the game plan against the Buckeyes.

Elliott, a former Clemson receiver, has been on coach Dabo Swinney’s staff since 2011. He was co-offensive coordinator with Jeff Scott from 2015 through last season, when Scott became USF’s head coach.

Clemson’s offense led the Atlantic Coast Conference at 44.9 points a game and with 343.8 yards passing per game this season.

The Nashville Predators will start their season Jan. 14 without fans for the foreseeable future with COVID-19 cases surging in the area.

The Predators announced the decision Wednesday, noting they want to support the Nashville community and not be a detriment.

The team had been working on a plan for reopening for months with the local board of health, the Nashville mayor’s office and the NHL. The Predators hope to allow limited numbers of fans inside Bridgestone Arena, but they say in a statement they know the landscape can change by the day.

That’s why the Predators won’t share plans too far ahead while giving as much notice as possible when those change. The arena has a capacity of 17,159 fans.

The Atlantic Coast Conference says the women’s basketball game between No. 2 Louisville and Virginia scheduled for Sunday has been postponed.

The announcement Wednesday comes amid positive COVID-19 tests, quarantining and contact tracing for the host Cavaliers.

In addition, the Cardinals’ game against visiting North Carolina has been rescheduled for Tuesday. That game was originally postponed from Dec. 13 due to coronavirus issues within the Louisville program and later rescheduled for Friday, though it was pushed back again due to what the league described as travel-logistics issues for the Tar Heels.

Louisville hasn't played a game since a 73-49 victory over Duke on Dec. 9. The Cardinals later paused all team-related activities after there was a positive COVID-19 test within their program while the Blue Devils decided to end their season due to safety concerns.

New York Jets rookie running back La’Mical Perine is being placed on the reserve/COVID-19 list after testing positive for the coronavirus.

Coach Adam Gase says the team is conducting contact tracing among the other players and team staff.

“There haven’t been a lot of people around the last few days, player-wise, because of the rules,” Gase said, referring to the NFL’s intensive protocols for all teams. “But we have a lot to go through right now.”

Perine is the first Jets player to test positive this season.

The Jets will be short-handed at the running back spot for their season finale at New England on Sunday. Frank Gore will be out with a bruised lung, leaving only Ty Johnson and Josh Adams as healthy players at the position. Gase sounded confident that neither Johnson nor Adams will be affected by Perine’s health situation.

Perine, a fourth-round pick out of Florida, returned last Sunday after missing four games with a high ankle sprain and had nine carries for 30 yards in New York’s 23-16 victory over Cleveland. He also had a 14-yard reception.

Perine, who missed the season opener after suffering a high ankle sprain in training camp, finishes with 232 yards on 64 carries and two touchdowns. He had 11 catches for 63 yards.

The Cleveland Browns have two more positive COVID-19 cases — another player and a staff member — as they prepare for Sunday’s finale against the Steelers.

The team closed its facility for several hours Wednesday after being informed of the test results. The Browns have not yet announced the identity of the player or added him to their COVID-19 reserve list.

The Browns already have nine players on the list, including their top four wide receivers. Those players and others are eligible to return Thursday as long as they test negative.

Sendejo will miss the game, as will starting linebacker B.J. Goodson; they have to be out 10 days after testing positive.