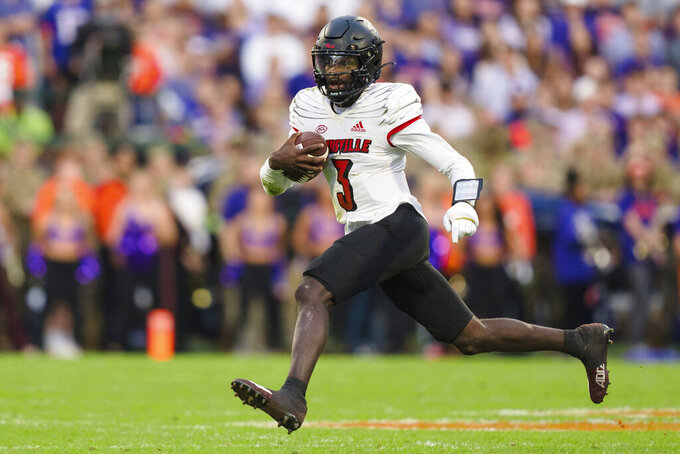 Louisville quarterback Malik Cunningham (3) runs with the ball in the first half of an NCAA college football game against Clemson, Saturday, Nov. 12, 2022, in Clemson, S.C. (AP Photo/Jacob Kupferman)

The fifth-year senior was injured on the final play of the first half in last week's 31-16 loss at then-No. 12 Clemson and did not return.

Saturday's game is the second Cunningham has missed this season. He sat out a 34-17 victory at Virginia on Oct. 8 with a concussion sustained in the previous game at Boston College.

Backup Brock Domann won that game in Charlottesville and made his second start of the season on Saturday against the Wolfpack.

Cunningham ranks second all time in school history with 12,828 yards, including 9,648 passing. He is tied with 2016 Heisman Trophy winner Lamar Jackson for the most touchdowns accounted for with 119 (70 passing).