LSU hosts ULM with bowl eligibility at stake for both teams 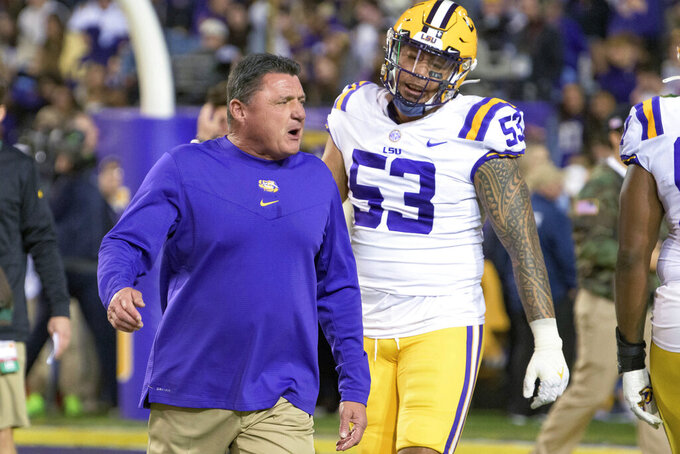 BATON ROUGE, La. (AP) — The reeling LSU Tigers are getting a needed break from the grind of their Southeastern Conference schedule.

Having lost three straight and on the brink of elimination from bowl contention, the Tigers (4-6) host Louisiana-Monroe (4-6) of the increasingly formidable Sun Belt Conference on Saturday night.

LSU coach Ed Orgeron, who is stepping down after this season, said he doesn't sense any quit in his players, who know they need to win their last two regular season games to end a difficult 2021 campaign with a bowl game.

“We play to win the game, ok? That’s important to us,” Orgeron began. "We’re competitive. I want these guys to finish strong and be proud.”

If the Tigers beat ULM, they'll have a chance to become bowl eligible when they host Texas A&M on Thanksgiving Weekend.

Louisiana-Monroe also still has a chance to become bowl eligible, but faces a rather difficult end to its schedule.

After visiting LSU, the Warhawks visit cross-state rival Louisiana-Lafayette, which already has won the Sun Belt West Division, will host the conference championship on Dec. 4 and entered this weekend ranked 22nd in the AP Top 25 poll.

This week, the Warhawks are 29 1/2-point underdogs at LSU, according to FanDuel Sportsbook.

“I’ve seen crazier things happen and I’ve been a part of crazy things happening,” said ULM coach Terry Bowden, whose coaching career began his under his father, the late Bobby Bowden, at Florida State in 1982, and who once coached Auburn to an unbeaten season in 1993.

ULM comes in having dropped three straight, but Bowden is no novice when it comes to motivating players to approach football the way they intend to approach life.

“You lose your job and the bank takes the mortgage of your house and your wife’s run off with somebody else — are you going to fight or will you quit?” Bowden said. “I do know the players will play as hard as they can and they won’t quit."

Orgeron has decided QB Max Johnson will retain his position as starter after LSU gave freshman Garrett Nussmeier the bulk of snaps in last week's 16-13 loss to Arkansas.

Nussmeier was 18 of 31 (58.1%) for 179 yards and led early scoring drives that culminated with a field goal and TD pass against Arkansas. But managed only one more scoring drive for a field goal in the second half and threw two interceptions, including one in overtime.

“I don’t feel like Garrett beat Max out,” Orgeron said.

Johnson has completed 59.9% of his passes this season for 2,190 yards, 22 touchdowns and six interceptions. However, his production had dipped in LSU's previous two losses to Ole Miss and Alabama.

“We need to have all three of them ready because of (LSU's) ability to get to a quarterback and get big people on that quarterback,” Bowden said.

Bowden is eager to see how Malik Jackson handles more work at running back after being moved from his usual slot receiver spot last week and breaking off runs of 53 and 75 yards.

“We found us a running back,” Bowden said of the 5-foot-9, 178-pound Jackson. "We found one of those little pieces to the puzzle that you need to have in a program like this: Guys that can make explosive plays.”

LSU has made a drastic improvement on defense since its bye week, holding Alabama to 20 points and Arkansas to just 13 points in regulation.

The new scheme allows first-year defensive coordinator Daronte Jones to blitz often and from a variety of formations, making them less predictable and forcing opposing QBs to make quicker decisions. LSU has blitzed more in its past two games than it had in the previous eight.

“Right now, we’re dictating what they’re going to do by sending pressure,” senior linebacker Micah Baskerville said. “They’ve got to get the ball out fast.”