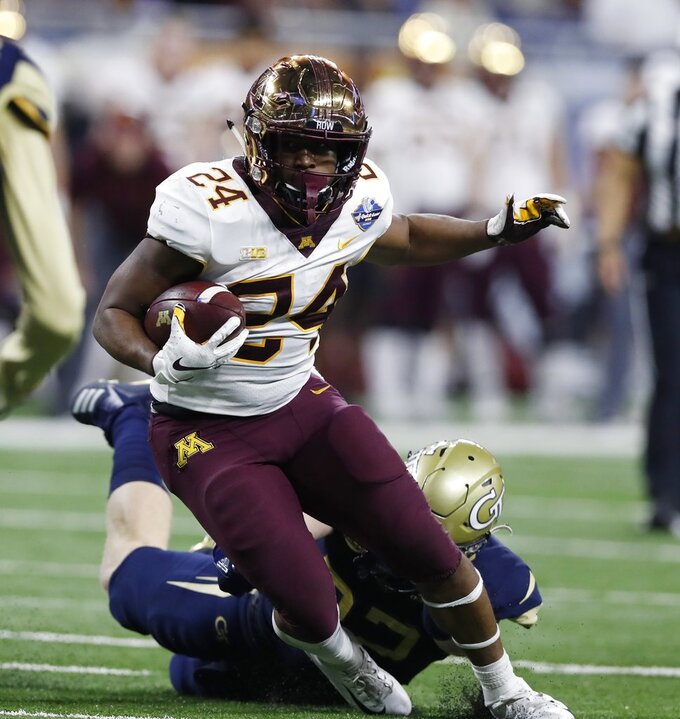 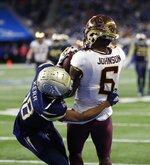 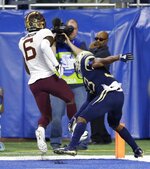 DETROIT (AP) — Mohamed Ibrahim took full advantage of holes his teammates created to burst through the line or get to the outside.

And when defenders were in Ibrahim's way, he simply lowered his shoulder to run over them.

Ibrahim ran for career-high 224 yards and two touchdowns, leading Minnesota to a 34-10 victory over Georgia Tech on Wednesday night in the Quick Lane Bowl.

The Golden Gophers (7-6) won three of their last four games, and Ibrahim had a lot to do with that. The 5-foot-10, 205-pound redshirt freshman running back had 121 yards rushing in a win at Wisconsin that made Minnesota bowl eligible and ran for 155 yards last month in a victory over Purdue.

"He's not the biggest, strongest or fastest," coach P.J. Fleck said. "He has that too short, too small, too this, king of the toos, which is right up my alley. This kid's got more heart, passion, courage and plays the game the right way more than anybody I've ever met."

The Yellow Jackets (7-6) did not have the speed or strength to slow down Ibrahim, who was so effective Minnesota didn't have to punt once. And, their triple-option offense was stunted in coach Paul Johnson's finale .

"They did pretty much whatever they wanted," said Johnson, who is retiring as Georgia Tech's coach. We never stopped the run and then we let them throw it over our head a couple times.

"I wasn't expecting that, but that's life and you move on."

The Gophers limited Georgia Tech to 206 yards on the ground after it led the nation with 335 yards rushing per game.

Minnesota: Ibrahim has the potential to be one of the top players on offense in the Big Ten next season. He runs with a mix of speed and power.

"He's a physical back," Johnson said. "He broke tackles and he ran through us some."

Ibrahim had the best day on the ground for a Gopher since 2005 when Laurence Maroney had 258 yards rushing against the Badgers.

"That's big," Ibrahim said. "He's a superstar and he had a great career."

Georgia Tech: The Yellow Jackets were in trouble when they fell behind because they don't pass much, making it tough to come back. They averaged fewer than 10 passes during the regular season and it was clear both of their quarterbacks were not comfortable dropping back to throw.

"It's tough to go out this way," Marshall said. "We didn't come ready to play and it showed."

Johnson set single-season school record with 1,169 yards receiving and 12 touchdowns. He finished the season with 78 catches, six short of another Minnesota record.

"The hard work and dedication paid off," he said.

"If you don't do the right things, you're not going to travel," Fleck said.

The Gophers also were without senior linebacker Blake Cashman, who announced his intention to skip the bowl game to focus on preparing for the NFL draft.

Minnesota: The Gophers had a nation-high 52 percent of their roster filled by freshmen, giving them a lot of hope for next season when they open at home Aug. 29 against South Dakota State.

"We have a bright future — for sure," Ibrahim said. "We're coming together as a team."

Georgia Tech: It will be challenging for Geoff Collins to win in his coaching debut with the Yellow Jackets. They play Aug. 22 at Clemson in the first game on the ACC Network. The former Temple coach, who is from Georgia, will be installing a new offense without a handful of starters on offense and the defense is losing eight starters.