No. 13 Wake Forest bullies BC as Hartman accounts for 6 TDs 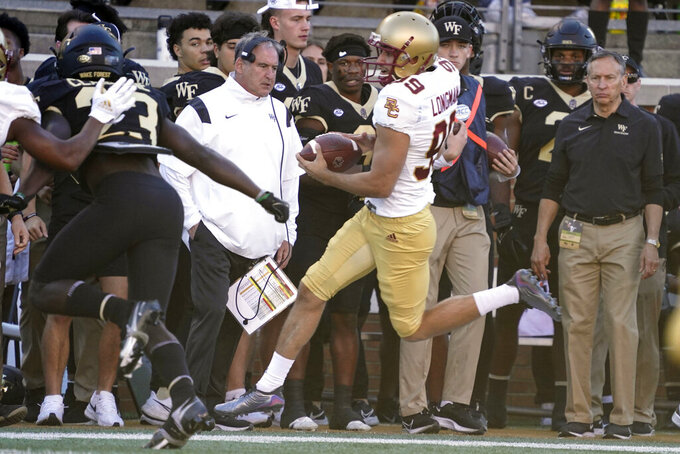 Boston College punter Danny Longman (99) runs for a first down on a fake punt during the first half of an NCAA college football game against Wake Forest in Winston-Salem, N.C., Saturday, Oct. 22, 2022. (AP Photo/Chuck Burton) 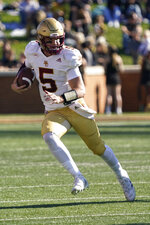 WINSTON-SALEM, N.C. (AP) — There’s so much belief in Sam Hartman that Wake Forest players want to follow his lead.

That worked well again as the redshirt junior quarterback threw five touchdown passes and ran for another score to lead No. 13 Wake Forest past Boston College 43-15 on Saturday.

“Sam has set that standard higher,” said wide receiver Taylor Morin. “We go out there and try to help him. Sam is what makes us go.”

All of Hartman’s touchdown throws — including two each to Morin and Jahmal Banks — were to receivers already in the end zone. A few times there was significant defensive traffic.

“Just the trust,” Banks said. “I trust him. He trusts me. He trusts all (the receivers).”

Hartman completed 25 of 40 passes for 313 yards. His 2-yard run gave Wake Forest its fifth touchdown and he added a two-point conversion pass in the final minute of the third quarter.

Phil Jurkovec threw for a touchdown and ran for another for Boston College (2-5, 1-4), which hasn’t defeated a Top 25 opponent since 2018. The Eagles fell to No. 5 Clemson two weeks ago.

Boston College’s Zay Flowers caught 10 passes for 135 yards, including a 61-yard touchdown catch. Jurkovec was 20-for-38 passing for 221 yards.

Hartman threw scoring passes of 12 yards to Banks in the first quarter and 12 yards to Morin and 13 yards to A.T. Perry in the second quarter. Morin caught a 4-yard toss in the third quarter and Banks clutched a 16-yard pass despite pass interference in the fourth quarter.

“It was so much fun,” Morin said. “It was exciting to be a part of. We feed of each other’s energy.”

In a bizarre second-quarter sequence, Boston College never went on defense after two fourth-down plays – first converting a fake punt, and later Jurkevic was sacked on fourth down with Wake Forest’s Jasheen Davis scooping the fumbled ball before giving the ball back on a fumble. On the next play, a wayward snap cost the Eagles 11 yards.

Then on second-and-21, Jurkovec connected to Flowers for a 61-yard touchdown play to close within 14-9. So the Demon Deacons never got a snap during that stretch, which included Boston College losing 25 yards on consecutive plays.

Hartman and Jurkovec each had 174 yards passing in the first half.

This was Wake Forest’s first home win against the Eagles in 10 years.

“I don’t think it was our cleanest game,” Wake Forest coach Dave Clawson said. “But we won an ACC game by 28 points.”

“There’s not another quarterback in the country I’d rather have,” Clawson said.

Boston College had incurred the fewest penalty yards in the ACC (38.7 per game) entering the week, but the Eagles were dinged several times by infractions.

They piled up 104 penalty yards on 11 flags, including 10 by midway through the third quarter.

Wake Forest became bowl eligible for the seventh year in a row. It seems like no big deal with larger aspirations.

Boston College: The Eagles’ battered offensive line didn’t give Jurkovic much time to operate in many cases and the Boston College offense failed to sustain drives.

“Was it execution? Was it play calling?” Hafley said. “It was probably a combination of everything.”

Wake Forest: The Demon Deacons took advantage of a steady passing attack. Their rushing attack was limited to 115 yards, including 59 in the fourth quarter. Wake Forest has scored more than 30 points in every game this season.

Wake Forest should hold steady with three straight wins by double-figure margins. The Demon Deacons will have chances to move up with three November games scheduled against Top 25 opponents.

Boston College: At Connecticut next Saturday.

Wake Forest: At Louisville next Saturday.