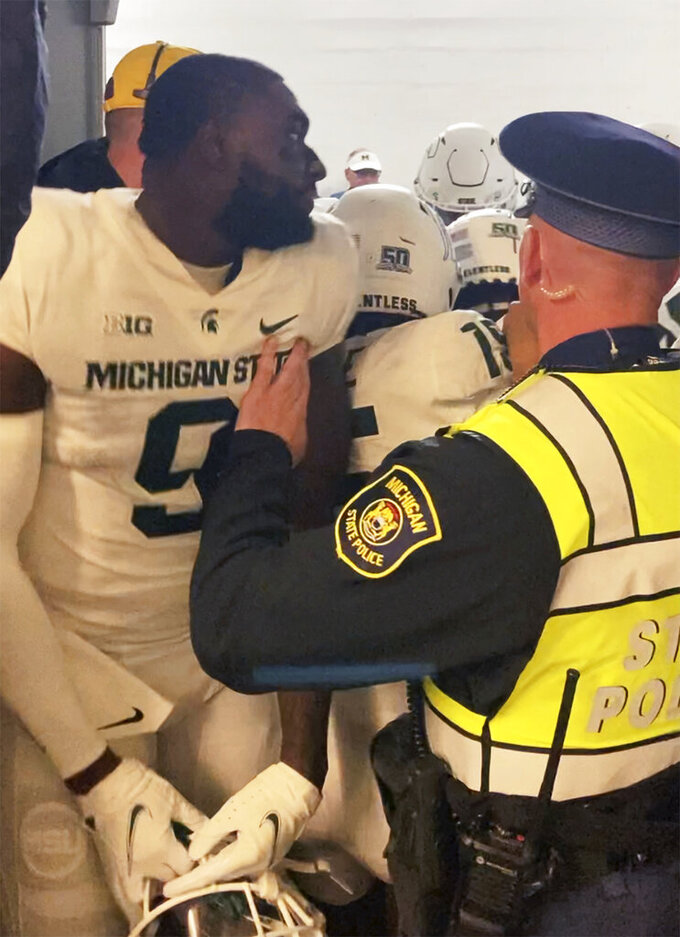 Security and police break up a scuffle between players from Michigan and Michigan State football teams in the Michigan Stadium tunnel after an NCAA college football game on Saturday, Oct. 29, 2022 in Ann Arbor, Mich. Michigan State President Samuel Stanley has apologized and says the actions of the football players who were involved in a postgame melee with Michigan players are “unacceptable.” He also says the players involved would be held responsible by coach Mel Tucker. (Kyle Austin/MLive Media Group via AP)

CHAMPAIGN, Ill. (AP) — Illinois has been the surprise of the year in the Big Ten after seizing control of the Big Ten West and winning six straight games.

The two programs are trending in opposite directions after the Spartans' 11-win season in 2021. Michigan State may have hit rock bottom last Saturday when violence erupted in the tunnel of Michigan Stadium after an embarrassing 29-7 loss to rival No. 4 Michigan.

Spartans coach Mel Tucker suspended eight players, including standout linebacker Jacoby Windmon, for their roles in the chaos. With four games left on the schedule, though, things could still get worse for Tucker's group.

“Obviously, the season hasn’t gone how we had hoped and how we had planned, but we’re all we got in the room," quarterback Payton Thorne said. "No one’s coming in to help us, no one’s coming in to save us. It’s all of us moving forward together. If we decide to start separating, it will all unravel and nothing good will happen for anybody.”

Illinois, meanwhile, is firing on all cylinders on both sides of the ball. Illinois ranks No. 1 in scoring defense (8.9 points per game), total defense (224.5 yards per game) and passing efficiency defense (77.9).

The Illini also enter Saturday with the No. 2 rushing defense in the country (75.63) and 15 interceptions, tops in the Bowl Subdivision.

Emerging star Chase Brown leads the country with 1,208 rushing yards and leads an offense that has also been resurrected by the playmaking abilities of quarterback Tommy DeVito, who transferred from Syracuse.

DeVito's 72.5% completion rate is tied for third among FBS quarterbacks. Even though the Illini lack an elite receiver, DeVito's arm — and his sound decisions — helped open Brown's path to historical success on the ground.

Spartans safety Xavier Henderson knows limiting Brown's effectiveness is the best way to keep his team in the game.

“The one thing about this kid, he is real patient at the line,” Henderson said. "And then his jump-cut ability and his vision is why he has the numbers he does and why he has the accolades he has.”

Michigan State is paying coach Mel Tucker $9.5 million a season and his job description now includes leading the program through a tough time.

Tucker suspended eight players for their roles in roughing up two players in the Michigan Stadium tunnel last Saturday night after losing to the in-state rival. The Spartans are now tasked with bouncing back after a lot of distractions and without some key players.

“We’re laser-focused on Illinois, and that was a big part of our message,” Tucker said. “What’s most important is what we do next.

“There’s no other choice to be made.”

Bielema said he quickly realized last week that the postgame fracas from Ann Arbor would reach the eyes and ears of his own team.

“I think we do try as coaches to minimize what our outside voices are saying to our players, but the bottom line in today’s world, you can’t,” Bielema said.

The Illini earned their first-ever College Football Playoff ranking on Tuesday, checking in at No. 16.

Keeping everybody focused on the task of beating the Spartans is the top priority. Bielema knows well that his group could be a week away from a tilt against Purdue that could go a long way toward determining who wins the Big Ten West.

After that the Illini travel to Ann Arbor and will have to deal with the same tunnel where visitors like Michigan State and Penn State have gotten into controversial dustups with the No. 4 Wolverines.

“As a teaching moment, we go to Michigan in two weeks," Bielema said. "So there are things I’m filing away right now that I’ll bring up that week when that moment comes.”

By the time Tucker meets with the media for his weekly news conference on Mondays, he has usually at least started scouting the next opponent.

Instead of preparing for the Fighting Illini, Tucker was still working on sorting out details from the altercations.

“I have not watched one play of Illinois film,” he said Monday. “My staff has, but I have some catching up to do. It’s all about priorities.”