No. 14 Iowa State looks to bounce back against winless UNLV 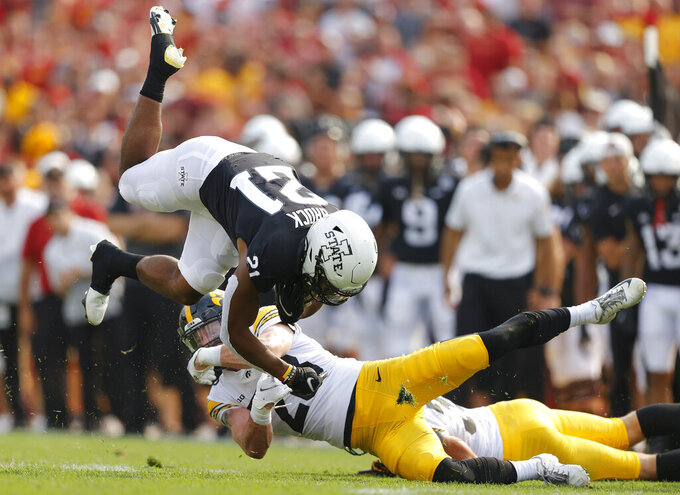 Iowa State running back Jirehl Brock (21) runs for a first down as he gets tripped up by Iowa defensive back Jack Koerner (28) during the first half of an NCAA college football game, Saturday, Sept. 11, 2021, in Ames, Iowa. (AP Photo/Matthew Putney)

But a rather sluggish 16-10 win over Northern Iowa in the season-opener and a 27-17 setback to rival Iowa last week has left the 14th-ranked Cyclones looking just to climb back into the playoff picture.

“We’ve got a great challenge ahead of us,” Iowa State coach Matt Campbell said during his weekly press conference. “The first road game of the season.”

The Cyclones on Saturday face winless UNLV, which is 4-19 all-time against teams currently making up the Big 12 Conference. The Rebels (0-2) lost an overtime thriller to FCS Eastern Washington in their home-opener then got thumped last week at Arizona State, 37-10.

To its credit, UNLV has registered four turnovers in the first two games, with three interceptions and a fumble recovery. Yet while UNLV has shown signs of improvement defensively at times, it still ranks 114th in the nation, out of 130 teams, in allowing 468 offensive yards per game. The 36 points per game they’re yielding is tied for 117th in the country.

Now the Rebels face the tall task of taming an Iowa State offense that is looking to rekindle its flame from last season. Iowa State is 4-1 all-time against UNLV.

School-record-breaking quarterback Brock Purdy didn’t like the feeling of being benched last week. But UNLV is not Iowa, and Purdy will enjoy playing in the middle of the Las Vegas Raiders’ stadium. Purdy needs 105 yards to become Iowa State’s all-time leader in total offense and could get that in the first quarter alone.

UNLV sophomore quarterback Doug Brumfield is day to day with an undisclosed upper-body injury, Rebels coach Marcus Arroyo said this week. If Brumfield can’t go, it leaves the door open for Arroyo to install former high school national player of the year Tate Martell into the lineup. Justin Rogers started the opener against EWU, but struggled and was pulled in favor of Brumfield, who sparked the offense. Martell, who went to Las Vegas’ Bishop Gorman, is at his third school after playing at Ohio State and Miami. Martell has never started in college. He has completed 24 of 29 attempts (82.8%) for 276 yards and one TD.

Without Brumfield, and regardless of who is under center, UNLV’s offense will need a strong effort from running back Charles “Chuck Wagon” Williams, who has run for 212 yards on 41 attempts, good for 5.2 yards per carry. Williams boasts the most career net rushing yards gained on the FBS level (3,152) among all current players. Two current FBS players (Liberty’s Joshua Mack and Hawaii’s Calvin Turner) have more career rushing yards than Williams, but a majority of them were gained on the FCS level before transferring to their current schools.

In its last seven games dating to 2020, Iowa State’s defense has given up just 22 points in the second half (excluding non-offensive TDs) and just one touchdown. During the seven-game stretch, Iowa State opponents are averaging just 15.3 points and 288.1 yards of total offense overall.