No. 15 Wake Forest aims to avoid defensive repeat vs. Army 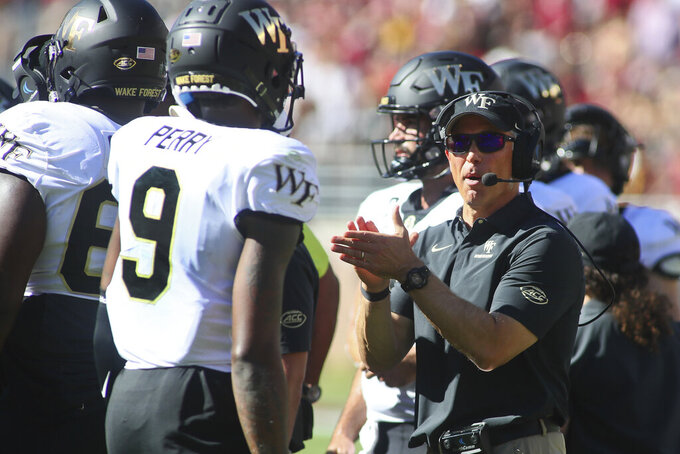 Wake Forest showed it could respond after a crushing loss. The 15th-ranked Demon Deacons now have something else to prove: that they can play better defense against Army on Saturday after surviving last season's frustrating shootout.

The Demon Deacons (4-1) won last year's game 70-56 in a wild afternoon at Michie Stadium thanks to an offensive output that stood as the program's best of the modern era. They'll get another try at slowing the Black Knights (1-3) as they step out of Atlantic Coast Conference play after last weekend's win at Florida State on the heels of a double-overtime loss to No. 5 Clemson.

“Sometimes there's games you win and you're relieved, and that (FSU) game was pure joy,” Wake Forest coach Dave Clawson said. “I think (it's) one of the biggest wins we've had here, and so much of it was because of the circumstances.”

And yet, Clawson admitted to feeling angst when reviewing last year's film of the Army shootout — “one of the most torturous games I've ever been through.”

The Black Knights ran for 416 yards. And their 595 yards were the most allowed by the Demon Deacons all year, a jarring performance in an 11-win season that included a trip to the ACC championship game.

“We understand the only reason it was close was because of us,” Demon Deacons linebacker Ryan Smenda Jr. said. “The offense put up (70) points and a triple-option team putting up 56 points, I feel like that's kind of unheard of. And they did it against an ACC team."

Army would love to find that kind of flow again. The Black Knights are off to their worst start since 2015 and have lost all three games against Bowl Subdivision opponents.

“We’ve got pretty high expectations around here, pretty high standards for the way we perform,” Army coach Jeff Monken said. “This team has won a lot of football games over the last four, five, six years. We’ve tended to find a way to win those games through gutting it out, being gritty and tough. And we haven’t found a way to do that.”

Wake Forest is tied for 16th in the FBS in scoring (40.4) and has amassed 202 points so far, a program record for the first five games in any season.

“We need a win badly,” Monken said. “A victory would really help this football team.”

Wake Forest's talent at receiver will present a challenge for Army. A.T. Perry has followed up his 15-touchdown season last year with three scores in five games. Donavon Greene has three TD grabs of his own in his return from a knee injury that sidelined him all last year. And Jahmal Banks has blossomed with five TD grabs, including a 141-yard, two-score day against Clemson.

Army came up short in a comeback bid last week in a loss to Georgia State, and one play stood out in a sign of its troubles this year.

The Black Knights trailed 17-0 at halftime before pulling within three early in the fourth quarter. But after the defense recovered a fumble, its vaunted option attack was stopped inches shy of the goal line on its bread-and-butter play -- fourth-and-1 – in a 31-14 loss.

Wake Forest is 12-5 in the series, including 6-1 at home against Army. The lone loss came in 2016, which was the Black Knights' last trip to Winston-Salem, North Carolina.