No. 16 Auburn, Mississippi State try to rebound from losses 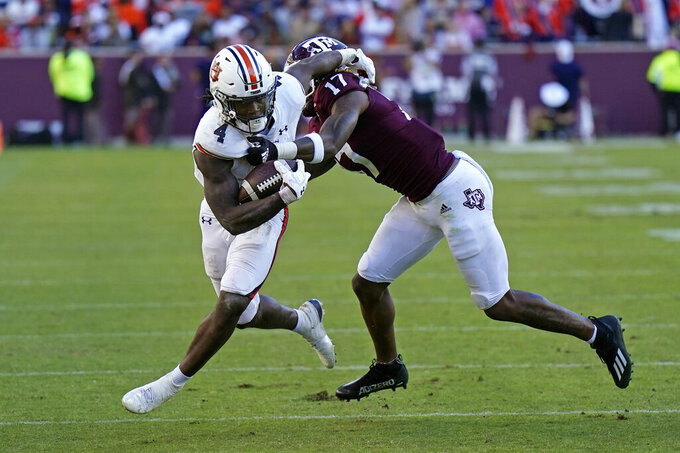 Line: Auburn by 5 1/2, according to FanDuel Sportsbook.

Both teams are trying to rebound from losses. The Bulldogs can become bowl eligible with another win after falling 31-28 at Arkansas. The Tigers dropped a 20-3 decision against No. 11 Texas A&M and need to get their offense back in gear. Neither defense allowed a touchdown in that game.

Auburn's defense, led by linebackers Zakoby McClain and Owen Pappoe and cornerback Roger McCreary, against the Bulldogs' pass-happy offense. Mississippi State targets a wide range of receivers, presenting challenges for the Tigers. But they had six sacks in last year's meeting.

Mississippi State QB Will Rogers is seeking his eighth straight 300-yard passing game. He has thrown for 18 touchdowns in that span and completed 75.2% of his passes.

Auburn RB Tank Bigsby has run for 735 yards and seven touchdowns, but he's been well contained in the Tigers' last two losses. He totaled 97 yards on 25 carries against No. 11 Texas A&M and top-ranked Georgia.

Coach Mike Leach has beaten four ranked teams at Mississippi State. A win would tie Emory Bellard's school record of four wins over an AP Top 25 team away from home. ... Auburn hasn't scored an offensive touchdown in the past six quarters. ... Auburn's Jarquez Hunter and Bigsby are the No. 2 running back tandems in the SEC with a combined 1,279 yards, behind Texas A&M's Isaiah Spiller and Devon Achane. ... Auburn's Oscar Chapman is leading the league with a 46.0-yard average per punt and the Tigers are fifth nationally in net punting (44.09 yards). ... The Bulldogs need just six completions to break the school's single season record of 373, set last season.