No. 19 Iowa, Minnesota face off as Big Ten division leaders 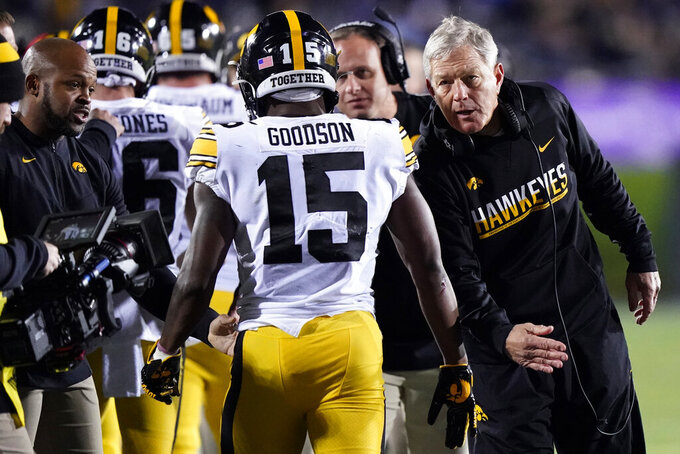 IOWA CITY, Iowa (AP) — The four-way tie at the top of the Big Ten’s West Division will start to unravel Saturday when No. 19 Iowa hosts Minnesota.

The Hawkeyes (7-2, 4-2 Big Ten) and Gophers (6-3, 4-2) are joined at the top by Wisconsin and Purdue. Minnesota is in a better position in the tiebreakers than Iowa right now. The Gophers have defeated Purdue and face Wisconsin to close the regular season; the Hawkeyes have losses to both those teams.

“Everybody in the West, those four teams, they control their own destiny,” Minnesota coach P.J. Fleck said. “We talked about being in November, being in the hunt for a championship. And here we are, with 19 days left. That’s what we’ve said — every year, we want to be in that type of hunt.”

Iowa coach Kirk Ferentz said he speaks regularly to his team about the importance of November.

“Just how important it is and that really is where teams get defined," he said. "That’s what (teams) get remembered by, typically.”

Both teams have had their recent struggles.

Minnesota split its first four games, then won four in a row before last Saturday’s 14-6 loss to Illinois.

“Even with the playmakers we’ve lost, we’re still in the hunt,” Fleck said.

Iowa surged up the national rankings, reaching No. 2 after winning its first six games before falling back after a two-game skid that came to an end with last Saturday’s 17-12 win at Northwestern. The Hawkeyes still remain last in the Big Ten in total offense.

“It will be interesting to see what happens over the next couple of weeks for sure,” Ferentz said. “For us it’s pretty easy. Our focus has to be on what’s in front of us. It leads into this week certainly with Minnesota coming to town.”

Iowa left defensive end Joe Evans might be feeling kind of small this week. He's 6-foot-2 and 248 pounds. He'll be matched against Minnesota right tackle Daniel Faalele, who is 6-9 and 380 pounds.

The depth and size of the Gophers’ offensive line concerns the Hawkeyes, especially when Minnesota uses six or seven offensive linemen in a “heavy” package.”

“I’m excited for the challenge,” Evans said. “They’ve got some big boys there.”

Alex Padilla is listed as Iowa’s starting quarterback, but there’s a chance Spencer Petras could play.

Petras, who has started 17 games over two seasons, injured his right throwing shoulder late in the 27-7 loss at Wisconsin on Oct. 30. He threw just four passes, completing two, before being lifted from the game at Northwestern. Padilla finished, completing 18 of 28 passes for 172 yards and leading the Hawkeyes on their two touchdown drives.

“Alex is helping himself, or helped himself, Saturday,” Ferentz said Tuesday. “So the good news as we stand here today, which is really premature, is we have two guys that have played pretty well. We know more now than we did a week ago, that’s for sure. And I’d love to have both guys healthy, ready to go. See where it all goes here.”

Iowa’s secondary will get some help with the expected return of cornerback Riley Moss, who has missed the last three games with a knee injury. He's tied for the team lead with four interceptions. He returned two for touchdowns in the season-opening win over Indiana.

THE BATTLE FOR FLOYD

Floyd of Rosedale, the bronzed pig trophy given to the winner of this game each season, has found a home in Iowa City in recent years. Iowa has won the last six games, and eight of the last nine, in the series, including last season’s 35-7 win. The overall battle for Floyd, though, is tied 42-42-2.