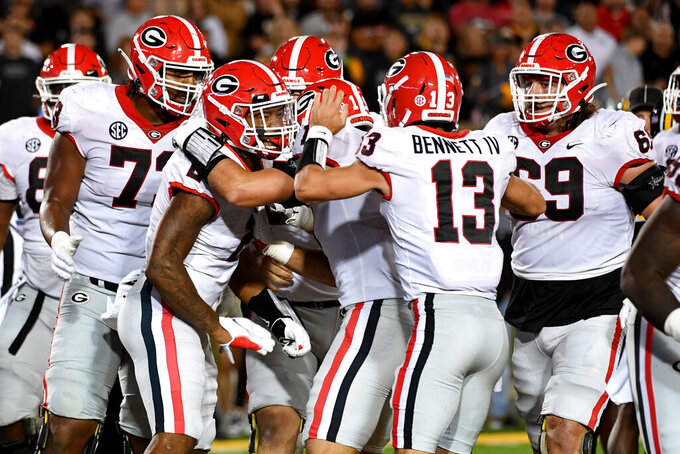 Georgia running back Kendall Milton (2) is congratulated by teammates after scoring during the second half of an NCAA college football game against Missouri Saturday, Oct. 1, 2022, in Columbia, Mo. (AP Photo/L.G. Patterson)

ATHENS, Ga. (AP) — Back-to-back unimpressive wins over Kent State and Missouri did more than knock Georgia from the top spot in the AP Top 25.

Giving up 22 points in each of the two games also put at least a temporary end to talk that No. 2 Georgia's defense can match the standard set by last season's national championship team.

That point was driven home as Georgia trailed most of the game before rallying late to beat Missouri 26-22 on Saturday. Missouri was a four-touchdown underdog but through three quarters won the battles on each line of scrimmage.

Suddenly, the Bulldogs appear to be in danger of losing their championship swag, though coach Kirby Smart was proud of his team's resiliency against Missouri.

“He says to us ‘a win is a win,’ really,” defensive end Tramel Walthour said Monday. “It doesn’t really matter how we get it, as long as we come out on top in the end. He’s telling us we have to come together as a team.”

Smart says defensive tackle Jalen Carter is expected to miss the Auburn game after suffering a knee injury against Missouri. Carter is the top-rated player on a defense which lost eight players in this year's NFL draft, including five first-round picks.

“We don’t know how long it’s going to be, but it doesn’t look good for this week,” Smart said Monday when asked about Carter's status.

Smart said another starter, “star” defensive back Javon Bullard, is expected to play this week. Bullard did not play against Missouri following his DUI arrest earlier in the week.

The defense was dominant as Georgia outscored Oregon, Samford and South Carolina 130-10 to open the season. Thanks to the strong start, Georgia (5-0, 2-0 SEC) leads the conference and ranks fourth in the nation with its average of 10.8 points allowed.

Longer possessions by the Bulldogs’ offense could help the defense return to its early season form. Wide receiver Adonai Mitchell has missed three consecutive games with an ankle injury, though he was in uniform at Missouri. Another wide receiver, Arian Smith, returned from an ankle injury to have one catch.

Stetson Bennett threw for 312 yards but did not have a touchdown pass against the Tigers. Mitchell’s return against Auburn could boost the passing game.

The visit from Auburn may help determine if Georgia can return to its early season form. A 39-22 win over Kent State was followed by the major scare at Missouri. The Bulldogs trailed 13-0 early and 22-12 in the fourth quarter.

Smart said it was a good test for his young players.

“There is a lot of youth there, but to be honest with you, it was a great opportunity to see what we’re about,” Smart said. "I don’t know if you could find any greater adversity than be down 10 points in the fourth quarter. ... We've got to make sure we do a good job building on that and start faster and better.”