No. 21 Heels look to close in on ACC Coastal title vs. Pitt 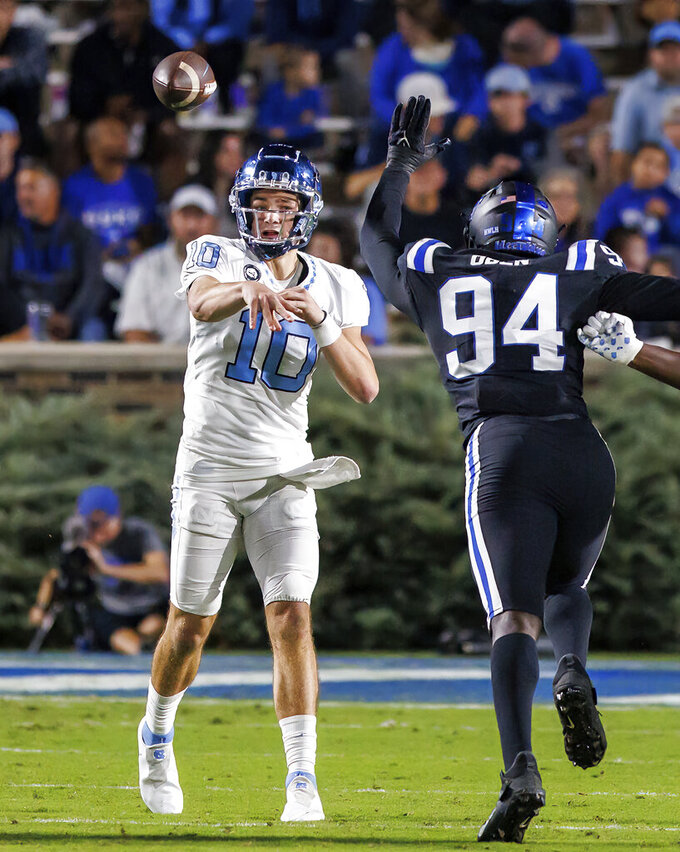 Pitt has won the last two meetings, both at home and both in overtime, but has never won in six games in Chapel Hill. The Tar Heels rank eighth nationally in both scoring (41.7) and total offense (506) and have topped 500 yards four times. The Panthers will need a big day from ACC rushing leader Israel Abanikanda (959 yards, 13 TDs) to keep UNC QB Drake Maye (326 ypg, 24 TD passes, 3 INTs) and his bunch off the field.

The Orange led most of the way in their 27-21 loss at Clemson before coming up short on their final drive, but showed they warranted their ranking. The Fighting Irish have been inconsistent, staying close with No. 2 Ohio State and beating No. 21 North Carolina, but losing to Marshall and Stanford. The Orange have three dynamic offensive players and a nationally ranked defense that should make it difficult for the inconsistent Irish attack.

Louisville has won two in a row, at Virginia and at home against Pitt, but neither compares to No. 10 Wake Forest and Heisman Trophy contender Sam Hartman. He's coming off a six-touchdown effort in a 43-15 victory at Boston College and has thrown for 21 scores with just three interceptions. The Cardinals did get Malik Cunningham back after a game on the sideline in the concussion protocol and forced at least three turnovers for the fourth game in a row. It may take another performance like that to keep Hartman and the Demon Deacons close.

No. 5 Clemson's victory over Syracuse gave the Tigers 14 wins in a row overall, the longest active streak in the country, and 38 consecutive ACC home wins, breaking the record they shared with Florida State. No member of the Tigers has ever lost a home game. ... Louisville has not won three ACC games in a row since 2017. ... The Cardinals' Malik Cunningham is three rushing TDs shy of Lamar Jackson's ACC QB record of 50.

Syracuse tight end Oronde Gadsden II leads the team with 37 catches and 593 yards and ranks third in the ACC with five receiving TDs. The 6-foot-5, 216-pound sophomore has three 100-yard games, and caught the winning TD from 25 yards out with seven seconds left as the Orange came back to beat Purdue 32-29 earlier this year.