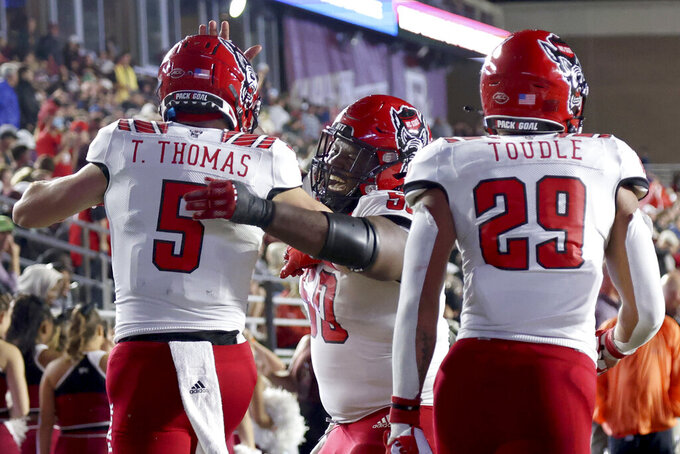 BOSTON (AP) — Thayer Thomas knew the pass wasn't intended for him. Then he realized he had a chance to catch it.

“On that play I’m not even a viable option," Thomas said after his leaping catch from Devin Leary on a broken play led to a 79-yard touchdown that helped No. 22 North Carolina State beat Boston College 33-7 on Saturday night.

“It’s kind of just like a scramble play,” Thomas said. "My job is to set the pick for somebody coming underneath me. Devin just went right, he found me and I just had to kind of make a play for him.”

The game was tied 7-7 with just seconds left in the first half when the Wolfpack ran their kicking unit out to squeeze in a 27-yard field goal before time expired. They then added three touchdowns in the third quarter — two of them off back-to-back BC turnovers — to turn a tie game into a 31-7 blowout.

N.C. State added a safety in the final four minutes to seal its third straight victory. Coach Dave Doeren said he hopes it sends a message to those who doubt whether the Wolfpack (5-1, 2-0 Atlantic Coast Conference) are for real.

“I mean, look, I can’t control the lack of respect that we seem to get, publicly. We know about it. Out team recognizes that people don’t think we’re good,” he said. “We’re going to end up where we’re supposed to be at the end of the year, and people will think what they think.”

Leary threw for 251 yards and three touchdowns, also completing a 40-yard scoring pass on the opening drive on a throw that bounced off the back of the defender before Devin Carter gathered it in.

The Wolfpack made it 17-10 when BC punter Grant Carlson muffed the snap after the Eagles' opening possession of the second half, and Devan Boykin picked up the ball and ran in from 34 yards out. After Isaiah Moore intercepted Dennis Grosel on a pass that bounced off the receiver's hands, Leary hit Dylan Parham from 4 yards out.

“The 14 points, like that,” BC coach Jeff Hafley said, snapping his fingers, “we just couldn’t recover from. We were down at that point 24-7, and just felt like a little bit too much at that time.”

On N.C. State's next possession, Leary scrambled right and lobbed the ball about 10 yards downfield, where Thomas leaped in front of tight end Christopher Toudle, brought the ball down and ran it the last 61 yards for the score.

Thomas caught four passes for 122 yards, and Emeka Emezie had two catches to become the Wolfpack's all-time leader in pass receptions, with 203.

The Wolfpack tackled BC running back Peter Stehr in the end zone with 3:39 left for a safety.

Grosel completed 21 of 39 passes for 194 yards for the Eagles (4-2, 0-2), who have lost back-to-back games against ranked teams since opening the season with four straight wins.

The Wolfpack scored on the opening drive when Leary's pass bounced off the back of defender Elijah Jones. Carter grabbed it with his left hand and scooted the final 7 yards for a touchdown before Jones realized it was a catch.

Grosel connected with Trae Barry on the Eagles' first possession for an 8-yard touchdown — BC's only score of the game. Christopher Dunn kicked a 27-yard field goal at the end of the first half to give N.C. State a 10-7 lead.

The Eagles had possession to start the second half, but the drive stalled at their own 42. When Carlson went to punt, he dropped the ball and Boykin scooped it up for the score that made it 17-7.

BC drove for what appeared to be another score when Barry grabbed a 14-yard pass from Grosel in the end zone. But as he came down, the defender knocked the ball loose.

Even as the referees signaled that it was incomplete, the celebratory fireworks went off anyway

After starting the season with four wins — three of them against non-Power 5 teams, Boston College is looking for its first conference victory. Back-to-back road games against Louisville and Syracuse offer little relief.

N.C. State: At Miami on Saturday.

Boston College: At Louisville on Saturday.