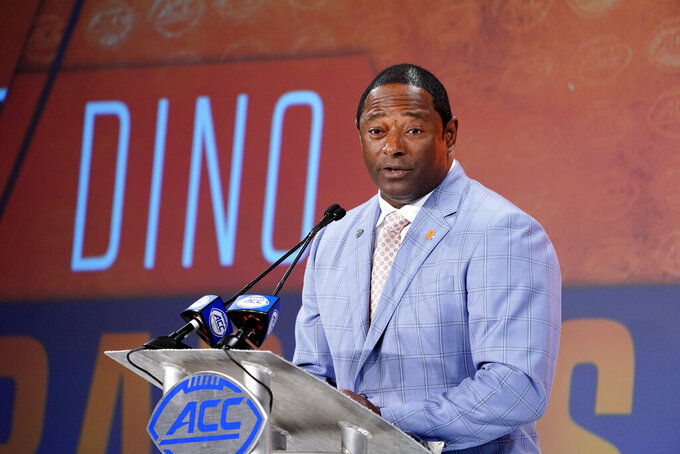 Known for his up-tempo offenses, the fourth-year coach is looking to his defense to help lift the No. 22 Orange to even greater heights this fall.

"Our defense is really, really good right now," Babers said. "I really think the strength of our football team is our defense. I think that we have an outstanding defense and ... they need to play that way."

After two straight 4-8 seasons under Babers, Syracuse went 10-3 in 2018 and finished the year ranked No. 15 by the AP after a victory over former Big East rival West Virginia in the Camping World Bowl. With redshirt sophomore quarterback Tommy DeVito replacing dual-threat quarterback Eric Dungey, the catalyst for an offense that averaged just over 40 points a game, Syracuse begins the season Aug. 31 on the road against Liberty ranked in the preseason for the first time since 1998.

The defense, which produced 31 turnovers (18 interceptions and 13 fumble recoveries), is a big reason why. Among eight returning starters on defense are ends Kendall Coleman and Alton Robinson, who each recorded 10 sacks, helping Syracuse produce the most turnovers of any Power Five team in the nation.

Also back is the entire secondary, including Evan Foster (86 tackles, one interception), Andre Cisco (60 tackles, seven picks) and Chris Fredrick (56 tackles, three interceptions). The trio ranked third through fifth in tackles behind linebackers Ryan Guthrie (107) and Kielan Whitner (100) and will be joined by often-injured safety Antwan Cordy, who received a medical redshirt for a sixth year.

Cisco, a free safety, became the second freshman in NCAA history to lead the country in interceptions, tying Boston College's Hamp Cheevers for the top spot and earning ACC Defensive Rookie of the Year recognition. He also set the program record for most passes defended by a freshman (18) and is more physically imposing this year.

"I learned a lot last year playing in such a physical conference," said Cisco, a first-team preseason All-American along with Orange place-kicker Andre Szmyt. "I put on my agenda that I needed to add a lot of weight, add a lot of muscle, and the coaches helped me do that. I feel like I'm in a good place right now."

Said Babers: "He's got an upper body that is no joke. I want to see if he can now physically do some of the things from a skill set that we saw him do from an athletic ability as far as getting interceptions and doing other things on the back end."

DeVito, who exudes confidence even though he has never started a game for the Orange, gave a playful sneer when asked about the defense after the third day of preseason camp. After the first scrimmage, that sneer was gone. The 90-minute session was 144 plays and the defense recorded seven sacks, an interception and a safety when Robinson took down DeVito on the first play on a day the retooled offensive line struggled.

"I saw a defense dominate the entire scrimmage," Babers said. "If you've got a good defense, suppose you have a chance to win, right? So I'm excited about that, we need to do some more things on offense."

Replacing Guthrie and Whitner at linebacker likely will be Lakiem Williams and Andrew Armstrong, while 6-foot-4 redshirt sophomore Tyrell Richards, listed as a defensive lineman, is versatile enough to play several positions. A big downside is that defensive tackle McKinley Williams is out indefinitely with a foot injury.

Regardless, there is progress all around as the Orange try to get accustomed to not being an afterthought on the national stage.

"You can definitely see there's a difference," DeVito said. "Now we're ranked with a lot of the higher schools, but at the end of the day rankings don't mean anything. You still have to go out on the field.