No. 22 Wake Forest opens season without Hartman vs. VMI 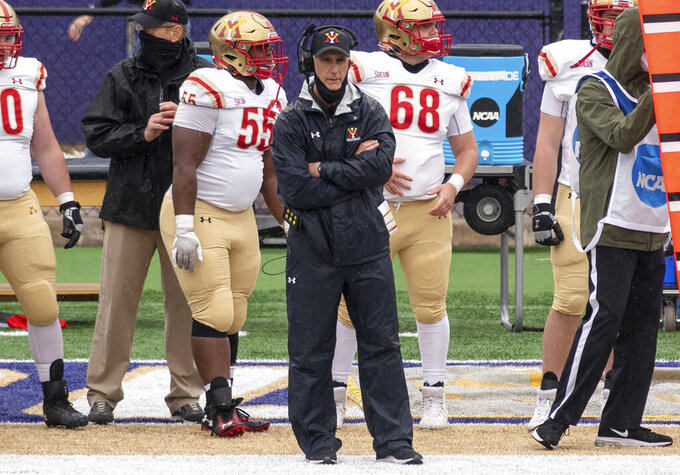 FILE - VMI coach Scott Wachenheim watches the team from the sideline during the second half against James Madison in a first-round game in the NCAA FCS football playoffs Saturday, April 24, 2021, in Harrisonburg, Va. VMI takes on Wake Forest on Thursday, Sept. 1. 2022. (Daniel Lin/Daily News-Record via AP, File)

Line: Wake Forest by 34 points, according to FanDuel Sportsbook.

The Demon Deacons are expected to be one of the top contenders in the Atlantic Coast Conference after reaching the league championship game last year. But they're opening the season with veteran quarterback Sam Hartman sidelined indefinitely by a non-football medical issue. This will mark the first career start for third-year QB Mitch Griffis, who will try to keep one of the nation's top offenses rolling against the Keydets from the Southern Conference of the Championship Subdivision.

VMI's secondary vs. Wake Forest WR A.T. Perry. Perry developed into one of the nation's top receivers last year and is the lead target for Griffis. Perry erupted in his fourth year to grab 15 touchdown catches, tied for third in the Bowl Subdivision. Perry and the Demon Deacons will face a defense that ranked near the bottom of the FCS in scoring (33.2, 100th) and yardage (443.6, 108th) last year.

VMI: LB Stone Snyder. The Southern Conference's defensive player for the year for the spring 2021 season ranked sixth in the FCS last fall with 10.9 tackles per game.

Wake Forest: WR Donavon Greene. It was Greene, not Perry or Jaquarii Roberson, who was supposed to be the Demon Deacons' top target last year. But he was lost to a preseason knee injury. He's set to return to the lineup in this one.

This is the first meeting in the series since 1944. ... Griffis has appeared in seven games. ... The Demon Deacons are 7-1 in season openers at home under Dave Clawson. ... VMI has never beaten a nationally ranked FBS opponent. The Keydets are chasing their first season-opening road win since 2002. ... VMI is coming off its first back-to-back winning seasons since 1961-62. ... The Demon Deacons have won 16 straight games against FCS opponents dating to 2000. ... Wake Forest is 15-2 at home since the start of the 2019 season, including a program-record nine straight wins entering this one.