No. 23 Arizona St tries to clean up mistakes vs. UNLV 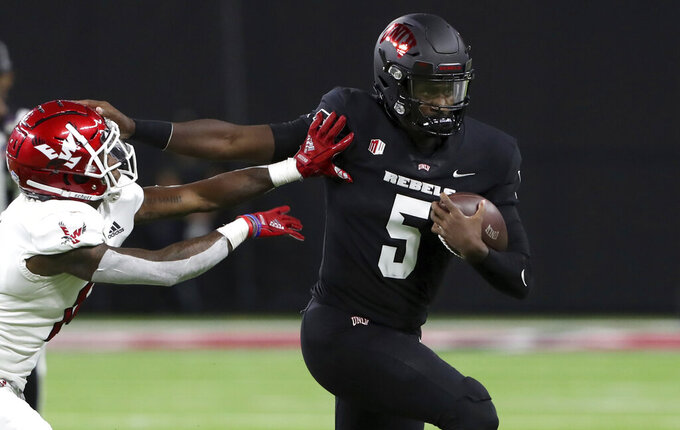 TEMPE, Ariz. (AP) — Coach Herm Edwards wants a better performance this Saturday from No. 23 Arizona State after last weekend's penalty-filled, mistake-riddled outing, even if it still resulted in a lopsided season-opening win.

As for UNLV? Winning ugly would be just fine.

The Sun Devils host the Rebels on Saturday in a nonconference game that appears to be a mismatch. Arizona State is expected to be one of the top teams in the Pac-12 this season. UNLV hasn't won a game since 2019 after going 0-6 in the pandemic-shortened 2020 season and then losing to FCS-level Eastern Washington 35-33 in double overtime last weekend.

The Rebels might not seem imposing on paper, but Edwards said focusing on UNLV won't be difficult.

“If you look at the film, no it’s not real hard," Edwards said. "I think we’ve always talked about a standard of how we want to play. And we didn’t do a good enough job of that on our opening day."

The Sun Devils beat Southern Utah last week despite 13 penalties for 135 yards and two turnovers. Junior quarterback Jayden Daniels was 10 of 12 passing for 132 yards and the Sun Devils will likely need more of that efficiency against UNLV.

Rebels coach Marcus Arroyo said there were plenty of good lessons learned from the loss to Eastern Washington, even if the 0-7 start to his tenure as head coach is frustrating. UNLV scored 14 points late to force overtime before eventually losing in double overtime.

UNLV’s last victory was on Nov. 30, 2019, over Nevada. It's no wonder they're nearly five-touchdown underdogs, according to FanDuel Sportsbook.

“Now (our defense has) to face two really good running backs and a great quarterback — some elite skill players," Arroyo said. “Great challenge for us to continue to find a way to win.”

The Rebels may have some problem spots on the roster, but running back isn't one of them.

UNLV senior Charles Williams is one of the nation's most accomplished active backs, running for 3,117 yards and 21 touchdowns over six seasons. Even though the Rebels lost last weekend, Williams was excellent against Eastern Washington, running for 177 yards and two touchdowns.

Williams has been at UNLV four years longer than Arroyo, who was hired following the 2019 season. Arroyo said Williams has done a good job adapting to the new system.

“His style does fit going downhill,” Arroyo said. “He's trusting the scheme. ... Exciting to see him get comfortable."

“There were a couple guys that really played well and he was one of them,” Edwards said. “There’s no doubt about that. And I think he likes the style of this defense, where he can run and go play.”

The senior is one of the most experienced players on the defense, playing a big role since he stepped on campus in 2018. Arizona State forced four turnovers against Southern Utah in the season opener.

Arizona State's defense has forced 38 turnovers over the past 12 games dating back to 2019. That's the most in the nation over the previous 12-game span.

It's a night game on Saturday in Tempe, which is good because the daytime temps on campus are expected to push 110. That might faze some teams, but UNLV shouldn't mind. The Rebels make their home in Las Vegas, which is one of the few cities that can match the Phoenix metro area on the heat scale.

One would think the UNLV-Arizona State matchup would be relatively common considering they're two of the few FBS-level schools in the desert Southwest.

That's not the case.

This will be just the second meeting between the two universities, which are about a five-hour drive apart. UNLV won the only other meeting in 2008.