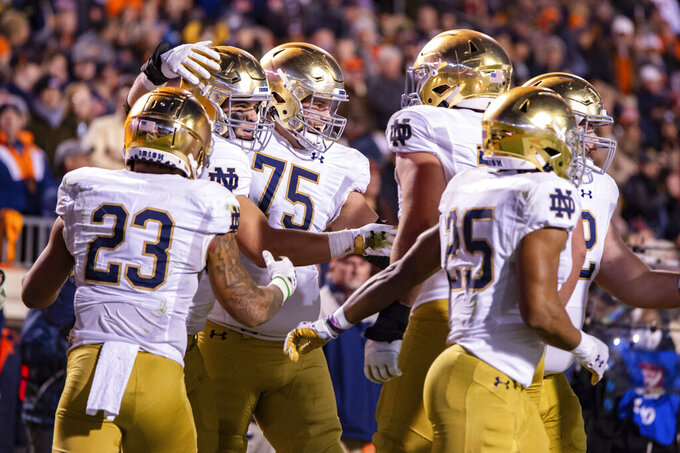 The Notre Dame offense celebrates after tight end Michael Mayer, second from let, scored a touchdown against Virginia during the first half of an NCAA college football game on Saturday, Nov. 13, 2021, in Charlottesville, Va. (AP Photo/Mike Caudill)

Line: Notre Dame by 16 ½, according to FanDuel Sportsbook.

Coach Brian Kelly’s Fighting Irish, seeking their fifth straight season of 10 or more victories, close out the regular season at home knowing they need victories over the Yellow Jackets and Stanford next week to keep alive whatever slim College Football Playoff hopes they have. Two victories likely would get Irish to a New Year’s Six bowl. Third-year coach Geoff Collins’ Yellow Jackets, in midst of four-game losing streak, won’t go bowling but could spoil the Irish's postseason hopes before concluding their regular season Nov. 27 against No. 1 Georgia in Atlanta.

Notre Dame’s balanced offensive attack vs. Georgia Tech’s 4-2-5 defense. Notre Dame quarterback Jack Coan has thrown for 614 yards and five touchdowns in victories over North Carolina, Navy and Virginia, while Kyren Williams has rushed for 364 of Notre Dame’s 692 yards on the ground. The Irish have turned the ball over just twice in that span. During its four-game losing streak, Tech has allowed 37 points and 548.8 yards.

Georgia Tech: RB Jahmyr Gibbs. He ranks second in the nation in all-purpose yards with 168.0 per game. He leads the Yellow Jackets in rushing (687 yards, 5.3 average), receiving (35 for 474 yards) and last Saturday returned kickoff 98 yards for touchdown in 41-30 loss to Boston College.

Notre Dame: Tight end Michael Mayer. Despite missing one game, the 6-foot-4½, Mayer leads the team with 52 receptions for 577 yards and four touchdowns. Thirty-one of his receptions have resulted in first downs. He trails only Tyler Eifert (63 in 2011) and Ken MacAfee (54 in 1977) for receptions by a tight end in a season.

Kelly is 2-0 against Georgia Tech after a 31-13 victory on Oct. 31, 2020 at Bobby Dodd Stadium. … Georgia Tech’s last victory over Notre Dame came in a 2007 season opener at South Bend when current Tech running backs coach Tashard Choice rushed for 196 yards in a 33-3 Tech victory. … Despite its record, Georgia Tech has been outscored just 302-288 in 10 games. … The Irish have won 40 straight games against unranked teams and has not allowed a touchdown in last two games.