No. 8 Oregon looking to stay unbeaten in Pac-12 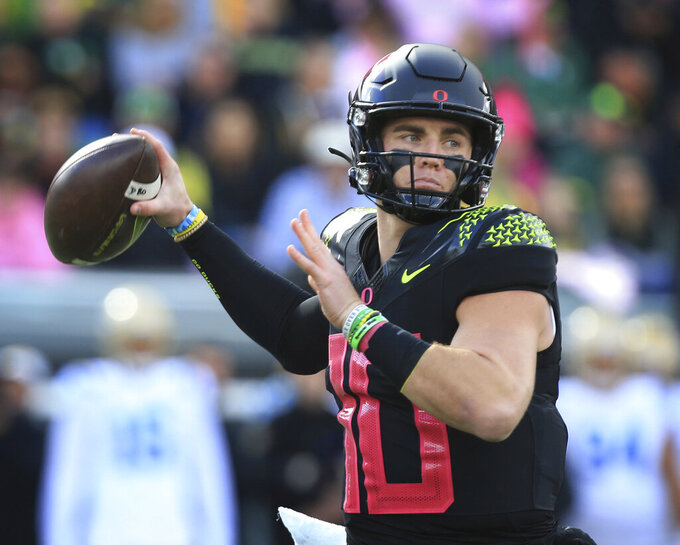 Oregon's Bo Nix throws down field against UCLA during the first half in an NCAA college football game Saturday, Oct. 22, 2022, in Eugene, Ore. (AP Photo/Chris Pietsch)

Line: Oregon by 17 1/2, according to FanDuel Sportsbook.

Oregon continues its chase at becoming the first team to go undefeated in conference play since the Pac-12 expanded in 2011. Cal is simply trying to salvage its entire season after three consecutive losses.

Oregon pass defense vs. California QB Jack Plummer. Plummer threw three TDs in last week’s loss to Washington and must have a strong showing against the Ducks for the Golden Bears to have a chance. Coupled with Cal’s struggles moving the ball on the ground, the challenge increases for Plummer. Working in the Bears favor is that Oregon's pass defense is ninth overall in the Pac-12, allowing 273.4 yards a game.

Oregon: QB Bo Nix, arguably the best at his position in the conference. Nix is coming off a five-touchdown performance against UCLA and has led the Ducks to six consecutive wins.

California: WR J. Michael Sturdivant had career highs in catches (8), yards receiving (104) and TDs (2) in the loss to Washington.

Cal head coach Justin Wilcox turned down an offer for the top spot at Oregon last December. … Oregon is averaging 42.4 points per game while Cal’s defense is allowing 22.1. … Oregon rallied from seven points down to beat Cal in 2021. … California is 1-8 in games decided by seven points or fewer since the beginning of the 2021 season. … The Bears will be without key senior OL Matthew Cindric, who had made 38 starts in his career.