No. 9 Oklahoma in unfamiliar role after coaching change 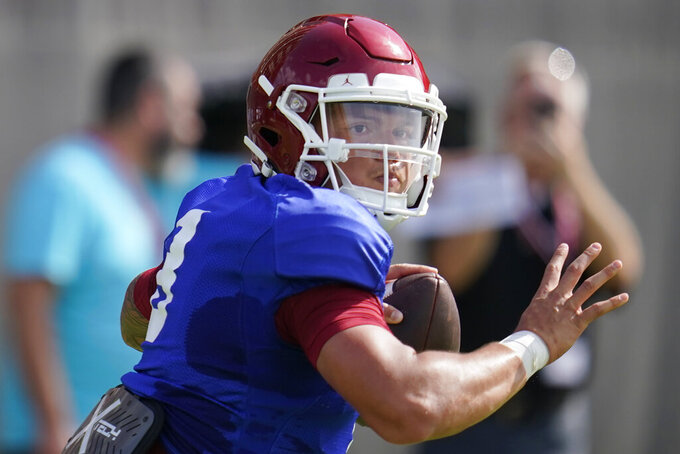 NORMAN, Okla. (AP) — There is a different vibe around the Oklahoma program this year.

The Sooners’ run of conference championships ended at six last season with a loss to Oklahoma State that cost them a spot in the Big 12 title game. Coach Lincoln Riley then quickly left for Southern California and quarterbacks Caleb Williams and Spencer Rattler transferred elsewhere.

Oklahoma hired Clemson defensive coordinator Brent Venables to steady the ship, but with all the movement, the Sooners aren’t even favored to win the conference this year — the coaches picked Baylor to repeat.

That doesn’t matter to Venables, who has been focused on the process heading into the ninth-ranked Sooners’ opener Sept. 3 against UTEP. He has a big-picture approach and expects to eventually have the kind of success the Sooners had when he was an assistant with the program from 1999 to 2011, which included a national title in 2000.

“Here we are, fall camp 2022, first season,” he said. “Our coaches and players and our staff have worked incredibly hard, relentlessly, trying to build for this season and beyond. And so I couldn’t be more excited about what’s in front of us.”

The Sooners have a new quarterback in Central Florida transfer Dillon Gabriel. The preseason Big 12 Newcomer of the Year passed for more than 8,000 yards and 70 touchdowns while leading some of the nation’s most productive offenses. He likes the team surrounding him, both at the skill positions and on the line, and he's not shying away from high expectations.

“The excitement’s real," Gabriel said. "People say they’re excited. But I’m truly excited because there’s just a bunch that we can do in every position.”

Many of the players have not been in action together, but Venables believes hard work will make up for it.

“We want a confident, physical, tough, blue-collar work ethic team,” he said. “Coming out of fall camp, I want our guys to be incredibly confident through the work that we put in over the last several months.”

Oklahoma running back Eric Gray put on 10 pounds in the offseason to position himself to handle a greater workload as the clear starter. The senior is listed at 211 pounds.

Kennedy Brooks was the primary ballcarrier last season, but Gray still managed to rush for 412 yards and gain 229 yards receiving.

“The room is going to start with EG,” Lebby said. “Eric has done an unbelievable job. The guy’s a pro. Everything he does is in a professional manor. Could not be more excited about where he’s at and what he’s going to be able to do for us this fall.”

Marvin Mims caught 32 passes for 705 yards and five scores last season. He stayed with the Sooners, even though Mario Williams transferred to USC, Jadon Haselwood left for Arkansas and Austin Stogner transferred to South Carolina.

Oklahoma assistant head coach Cale Gundy announced his resignation on Aug. 7, and the school said the next day that Gundy uttered a racially charged word multiple times while reading off a player's device during a film session the previous week. Gundy had been with the program since 1999.

Venables said L’Damian Washington, who had been an offensive analyst, will coach receivers on an interim basis: “He’s already had incredible relationships built with these guys and trust and really a deep understanding of who they are as young men.”

Oklahoma visits old rival Nebraska on Sept. 17. There's the annual showdown against Texas in Dallas on Oct. 8. Two of the biggest matchups are at home — Nov. 5 against No. 10 Baylor and Nov. 19 against No. 12 Oklahoma State. Run the table and a return to the playoff could be in the cards.